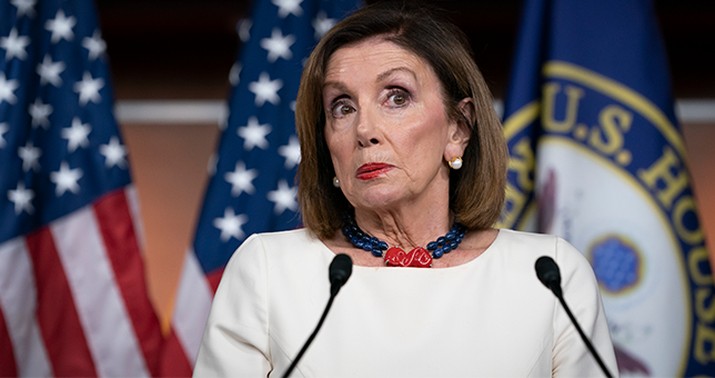 Just a brutal number for Democrats, not only on the merits but because it’s coming from Quinnipiac. Quinnipiac typically has bad numbers for Trump, particularly on his job approval. That’s pretty bad in this poll too, in fact, clocking in at 40/57. He trails every top-tier Democrat head to head as well.

So to find public opinion on impeachment trending in his direction in a Q-poll is a big deal. If it’s this bad in a national poll of registered voters, imagine what a poll of likely voters in battleground states looks like nowadays. Hoo boy.

Maybe I’m wrong about her twisting arms to get as many Dems as possible to support impeachment. Maybe she’ll look at these numbers and decide all she needs is 218. Let a few moderates try to save themselves.

Support for impeachment and removal has been trending south in Quinnipiac polls for weeks. In late September, before the Ukraine story broke big, the public split 37/57 on removing him. Then people started warming up. Within five days, it was up to 47/47. A month later it had inched higher to 48/46. But then the trend reversed, with support sliding to 45/48 by late November. Today’s number represents the first time since September that a majority has opposed removal.

At no point in any Q-poll has a majority favored it.

I wonder how much of the public’s trend towards opposition is due to growing skepticism about the Democrats’ case and how much is due to other factors influencing public opinion in Trump’s favor, which in turn ends up undercutting support for removal. Right, granted, his job approval is weak here, but check this out. This is a *big* number:

Quinnipiac asked that same question twice before this year and the highest number they saw was 52 percent. The blowout jobs report last week obviously made an impression; check out the split among independents, who are now better than two-to-one in saying that they’re better off financially than they were before. Not surprisingly, the jobs numbers have also pushed Trump’s rating on handling the economy to the highest level it’s been in more than a year — 54/42, the first time he’s been at 50 percent or better in all of 2019.

I don’t know how to square that with his overall job approval except to say that perceptions of Trump the man doubtless heavily color the latter whereas a specific question about his handling of the economy ends up with character assessments being compartmentalized. How will that work out in the booth next November? “He’s really, really obnoxious, even corrupt — and I’ve never made so much money.”

Also not coincidentally, Trump has gained ground head to head against Biden, Warren, and Buttigieg since Quinnipiac’s poll last month. He still trails all three, but if you’re looking for a way to measure whether impeachment is hurting him or not, the fact that he’s gotten more competitive with top Democrats as it’s played out would seem to provide an answer.

Where does all of this fit in the big picture? Well, here’s the RCP average of Trump’s daily job approval over the past six months. The Ukraine story exploded in late September. Trump’s approval did take a hit afterward, but note the trend lately:

His approval today stands at 44.6 percent. The last time he touched that number was September 27. He’s fully recovered from the hit.

In lieu of an exit question, read Bonnie Kristian speculating on whether Pelosi might give up on impeachment after all. There’s no way — her prestige would be shattered and the party’s base would riot. But like I say, we’re getting closer to an outcome here in which Pelosi frees some moderates to vote no to save themselves — even though Trump will spend months crowing that Schiff’s impeachment pageant ended up costing his party more votes than it gained.