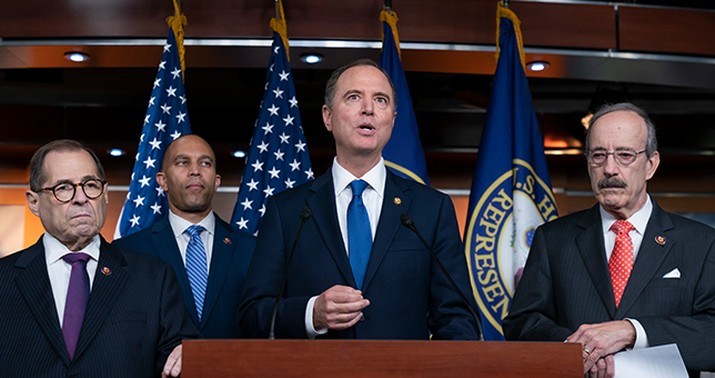 A leftover from Friday via the Examiner. Two weeks ago I wrote here that despite all the reports of “cold feet” by House Dems, they’d have no choice but to follow through and vote for impeachment. And that remains true; there’s no way Pelosi would have proceeded if she didn’t have 218 in the bank. My thought at the time, though, was that she’d want much more than that on the final vote considering that 231 had voted to authorize the inquiry. If anyone switches from yes on the inquiry to no on impeachment it’ll be a terrible humiliation for Democrats, proof that their big pageant not only failed to persuade skeptical Americans watching at home but actually cost them votes within their own caucus.

Will she have it? CNN posted this late Friday afternoon:

“The fact of the matter is this does have political consequences and the people who will suffer significant political consequences are our moderate members. In fact, there are on-year amounts of money being spent in districts all across our moderates. For our leadership not to engage with moderates at all to either talk about how they are going to message or what they are going to put in it, seems to be a giant oversight,” [one Democratic moderate] said.

Another moderate Democratic member lamented that the information about articles of impeachment are “secondhand.”

“I would say look I am concerned about not knowing what the articles will have in them. I am concerned about the timeline of this whole impeachment process. For me, right now, I am struggling to see how the evidence supports impeachment at this point,” the member said on the condition of background in order to speak freely about internal discussions.

Two Democrats voted against authorizing the impeachment inquiry. Is Pelosi about to lose a third on the big vote? Or more?

Maybe not. It’s possible, after all, that the two unnamed moderate Dems who are quoted in the excerpt are the same two who voted against the inquiry, Collin Peterson of North Dakota and Jeff Van Drew of New Jersey. It could be that they’re speaking anonymously right now for fear of infuriating their colleagues, knowing that going on record and undermining the investigation while the caucus is still desperately trying to build momentum for it would be a bad look. But that’s actually not true in Van Drew’s case: He did go on record late last week, telling the Hill on impeachment that “I’ll always have an open mind. But where I am now is where I was before.” (He’s being threatened with a primary challenge as a result, of course.) So either the mystery Democrat is Peterson or … it’s some as-yet-unknown third Dem who’s considering voting no.

Brenda Lawrence, maybe? Or someone else? How hard is Pelosi going to have to twist arms to prevent this vote from turning into an embarrassment?

It’s not just the humiliation factor. Whatever happens in the House impeachment is bound to have some effect on how Romney and Murkowski vote in the Senate. If Democrats had a unified caucus in favor of impeaching Trump plus a handful of Republicans on their side, Romney and Murky might be emboldened. It’s easier to buck your party when some members are already on record as agreeing with you. If instead we end up with Republicans unified against impeachment and more than two Democrats peeling off to vote no with the GOP, that makes Romney and Murkowski’s task much harder. Now, if they vote to remove, they’re demonstrating that they’re more anti-Trump than even some Dems are.

And they’d be doing it after at least one member of Pelosi’s own caucus switched from yes on the inquiry to no on impeachment, so unpersuasive did they find the evidence.

Question, then: Might Pelosi try to expand the menu of impeachment options in order to make the wary moderates on her side hungrier to impeach? They’re reportedly thinking about it.

Democrats have offered divergent opinions in recent days over whether to include Mueller’s report in articles of impeachment. On Friday, Rep. Max Rose, D-N.Y., warned against including the former special counsel’s work, telling CNN he “was very serious” about his anti-impeachment stance prior to Ukraine.

The idea would be to call a vote on each article of impeachment separately rather than bundle them all together in a single charge and then force an up-or-down vote on that. The latter would be a nightmare for moderate Dems since it would require them to approve impeachment over the Ukraine matter plus whatever else is in the document, like the obstruction case in Mueller’s report. It’d be “impeachment plus,” in other words, at a moment when centrist Dems are looking for ways to turn down the impeachment heat. If they’re allowed to vote on each article individually, then they could vote yes on the Ukraine stuff and no on everything else to try to signal their moderation to swing voters back home. “We’re only impeaching him for the worst offenses, not for everything!”

But some moderate Dems don’t like that idea. For one thing, just the fact that they’d be voting on extra articles that are unrelated to Ukraine would feed the GOP narrative that Democrats are crazed with hatred for the president and willing to kitchen-sink it in accusing him of wrongdoing. Plus, what if the extra articles actually pass despite the opposition of moderates? Suddenly they’d be stuck having to decide whether to defend “impeachment plus” as it proceeds to the Senate or to spend the next month or two grumbling loudly that there are too many charges against Trump, which is an awful talking point while their impeachment managers are preparing to try the case.

Maybe the “impeachment plus” scenario is a head fake engineered by Pelosi to make moderate Dems more accommodating on the Ukraine material. “Okay, I’ll make you a deal,” she might tell them. “I’ll make sure that everything unrelated to Ukraine stays off the floor and out of the articles of impeachment — if you pledge to vote yes in return on the Ukraine stuff.” What do they do then?

Exit question: Am I wrong that Pelosi will try to get all 231 Dems who voted for the inquiry to also support impeachment? That made sense early on, as it’d be humiliating for Dems to lose votes from their own ranks after Schiff presented his evidence, but given how flat the polling is and how unlikely it now seems that any Senate Republicans will vote to remove Trump, why not let a few endangered House Democrats vote no to protect themselves so long as there are 218 yays in the bank? There are no good options for Pelosi at this point. If she can save a few centrist seats next year at the cost of terrible PR over Dems breaking ranks now, why not do it?