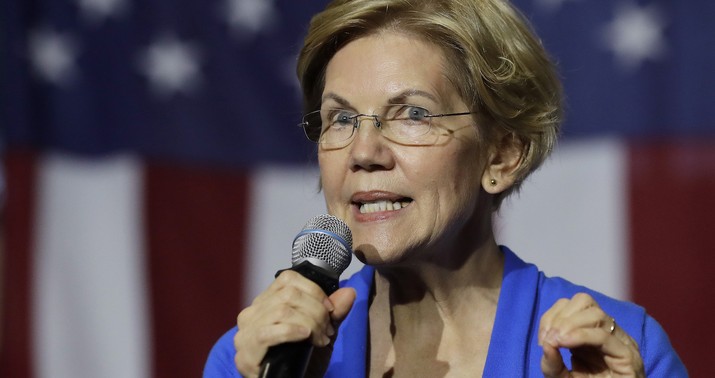 And to think, I’ve been feeling sheepish these last few months for pointing to her poor polling this past spring and declaring that her candidacy was going nowhere. She rose steadily all summer and into early fall! She led in multiple early states! She was the one member of the top tier whom every pundit agreed was exciting crowds on the trail!

This new one from Quinnipiac is “just one poll,” as the data nerds like to say, except … it’s not really “just one poll.” As we’ll see momentarily, Warren has been slipping in lots of polls over the past month and a half. And her downturn in today’s data isn’t really a “slip,” it’s a minor catastrophe. She went from 28 percent in Quinnipiac’s last poll, good enough to lead the pack, to 14 percent today. Half of her support vanished.

Any theories why? Because I have one.

Biden has recovered a bit after slipping over the past few months and Bernie is Bernie. It’s Buttigieg who’s risen at Warren’s expense, although he hasn’t gained nearly as much as she’s lost. What’s causing the hemorrhaging in Warren’s support?

Here’s another clue, the results when Dem primary voters are asked which candidate has the best policy ideas. Note Warren’s huge lead in October and compare it to her much more modest lead now:

Scarcely a month ago, she was head and shoulders above everyone else as the Candidate Of Ideas. Six weeks later, she barely enjoys any advantage at all. Thanks mainly to Democratic moderates as it turns out. Hmmm!

Need one more hint? All right, here’s what you get when you ask people if they support “removing the current health care system and replacing it with a single payer system, in which the federal government would expand Medicare to cover the medical expenses of every American citizen,” a.k.a. Medicare for All:

When Quinnipiac asked that question two years ago, the split was 51/38 in favor. Earlier this year it had slipped to 43/45. Now it’s dropped to 36/52. Note also that white voters with and without college degrees are both solidly against the idea. Left-leaning white college grads are a core Warren group, or at least they’re supposed to be. You would think that demographic would be a bit more evenly split despite its overall Republican lean, but no.

All of which is a long way of saying that Medicare for All has become a weight around her ankles. She was savaged by both sides when she rolled out her health-care plan earlier this month: Righties thought the math was farcical, lefties thought she lacked the guts displayed by Bernie Sanders to tell the truth about the costs and new taxes involved. But Warren’s pain on health care had begun a few weeks before that, with Pete Buttigieg attacking her at the October 16 debate for her conspicuous refusal to offer specifics on how she’d pay for the program. The Candidate Of Ideas suddenly seemed to be trying to pull a fast one on the most momentous Democratic policy idea of all.

Look what it did to her to her polling in the RCP average:

The brown line representing Warren’s polling climbs up, up, up through September and early October, and then the attacks on Medicare for All begin and … here we are.

As chance would have it, the Times published a story this morning before the new Quinnipiac poll appeared about various Democrats’ discomfort with a particular policy idea that’s gained currency in the presidential primary. Can you guess what that idea is?

From Michigan to Georgia, North Dakota to Texas, Democratic elected officials, strategists and pollsters are warning that the party’s commitment to the Obama-era Affordable Care Act — widely seen as critical to electoral gains in 2018 and 2019 — could slip away as a political advantage in 2020 if Republicans seize on Medicare for all and try to paint Democrats as socialists on health care…

Warnings are being issued at all levels of the Democratic Party, from union members who fear losing hard-won benefits, to candidates running in swing districts, all the way up to former President Barack Obama, who offered a pointed warning about the risks of overreach at a gathering of donors in Washington, D.C., this month. People close to the former president said his remarks were rooted in his experience passing the health care law, which prompted his concerns about how willing voters would be to embrace an even more sweeping change…

[A]s the race moves closer and closer to the start of primary voting, other polling indicates that voters in key battleground states have grown more skeptical of implementing Medicare for all. A survey released this month by the Kaiser Family Foundation and Cook Political Report found that nearly two-thirds of swing voters in Michigan, Minnesota, Pennsylvania and Wisconsin rated a Medicare for all plan that would eliminate private insurance as a “bad idea.”

Voters never shift for just one reason, even if they shift for mostly one reason. It may be that some Democrats who had backed Warren last month have ditched her now for electability reasons, because they saw that NYT battleground poll showing her losing to Trump and freaked out. Or it may be that some previous Warren voters preferred her because they prefer a certain type of candidate, a white well-educated technocrat, and have now found someone more their type in Pete Buttigieg. If Warren looked unbeatable against Trump, if Buttigieg weren’t in the race, it’d be easier for soft supporters to stick with her and weather the Medicare for All storm.

But again, here we are.

Speaking of Trump, one more number for you. When Quinnipiac asked about impeachment last month, the public stood at 48/46 in favor. This month, after several weeks of televised hearings, they’re at … 45/48. That’s not to say they think Trump did nothing wrong with Ukraine — by a 49/40 margin, Americans believe he blocked Ukraine’s military aid to get Zelensky to announce investigations that would benefit him politically. They just don’t want to go nuclear by impeaching him for it. So add this to the pile of post-hearing polling showing that public hearings did nothing to improve Democrats’ support on impeachment and may actually have hurt a bit.

Anyway, I’m starting to get a “2008 Republican primary” vibe from this Democratic presidential mess, where voters are “meh” about all of the candidates for months and in the end settle on the very well-known and seemingly “electable” old guy. Congrats, Joe Biden! In lieu of an exit question, here’s Kamala Harris going to bat for Biden last week on Burisma. Given where she is in the polls, she’s probably just running to be Biden’s VP now.

TONIGHT: Sen. @KamalaHarris reacts to breaking news that Sen. Lindsey Graham is launching a probe into the Bidens in Ukraine. #LSSC pic.twitter.com/ZwLVRZtzO7