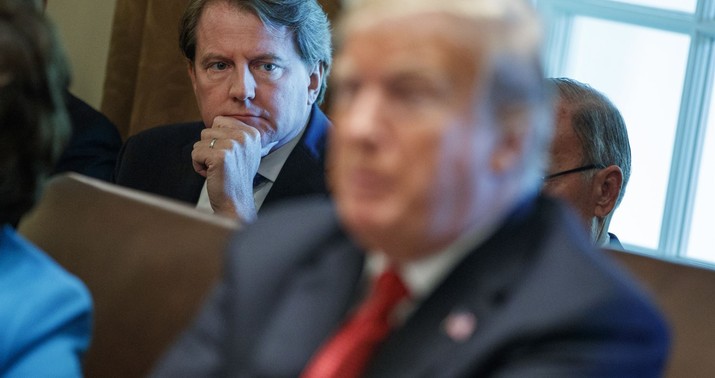 This is a lower-court ruling, with appeals doubtless to follow at the circuit level and maybe before the Supremes, so there’s still a lot of legal ball here left to be played.

But House Democrats wanted to win this one, hoping that a ruling against Trump on executive privilege might jar loose some of the key Ukraine witnesses who had been ignoring subpoena until now. Don McGahn’s subpoena was issued during the Russiagate probe, not the Ukraine matter, but obviously any new rule involving testimony for the former will apply to the latter, probably more forcefully given that the House has invoked its impeachment power in investigating Ukraine.

The judge, Ketanji Brown Jackson, is an Obama appointee, a fact Trump will doubtless note once he tweets about this. But in the meantime, the White House’s “absolute immunity” defense to House subpoenas is shattered. The key section addressing presidential power to defy Congress on grounds of executive privilege begins on page 102 of the decision. Certainly, says Jackson, McGahn may have valid grounds to hold back certain information as privileged while testifying. But to refuse to appear altogether on the theory that Congress can’t compel an executive-branch employee to speak if the president doesn’t approve? Nope:

[T]he question becomes why, then, would such senior-level aides need absolute immunity? In other words, even without a total exemption from compelled congressional process, senior-level White House aides can withhold the kinds of confidential and privileged information that distinguishes them from everybody else; they can do so by asserting an appropriate privilege if needed, when legislators ask questions that probe too deeply. Thus, it appears that absolute testimonial immunity serves only the indefensible purpose of blocking testimony about non-protected subjects that are relevant to a congressional investigation and that such an aide would otherwise have a legal duty to disclose.

The DOJ also argued that letting Congress force White House officials to testify will hinder candor within the executive branch by giving the president and his subordinates reason to wonder if the things they say to each other will eventually be revealed under oath in front of TV cameras. Again, says Jackson, privilege can be asserted during the hearing as appropriate. But more generally, the president’s advisors need to remember whom they ultimately work for:

As the Supreme Court has suggested on numerous occasions, Congress brings in witnesses not as punishment, but to provide the Legislature with the information that it needs to perform its critical legislative and oversight functions… Thus, the idea that having to testify truthfully about the inner workings of government is a threat that would actually be sufficient to prevent key public servants from competently performing as assistants to the President seems anomalous. Moreover, if the institutions of our government are all, in fact, pushing in the same direction as they should be—i.e., toward developing and implementing policies that are in the best interests of the People of the United States—then the possibility that one of the public servants who work within the government might be called upon to cooperate with Congress, and thereby perform his public duty of giving authorized legislators the means of performing their own constitutional functions, provides no reasonable grounds for fear. And if it does, as DOJ here suggests, then that is all the more reason why such testimony is critical.

More than that, though, Jackson continues, consider what would happen if we adopted the DOJ’s view that the president has the right to completely block testimony not just by all current aides but by former aides. That power sounds a bit … monarchical:

This single exchange—which brings to mind an Executive with the power to oversee and direct certain subordinates’ communications for the remainder of their natural life—highlights the startling and untenable implications of DOJ’s absolute testimonial immunity argument, and also amply demonstrates its incompatibility with our constitutional scheme.

Stated simply, the primary takeaway from the past 250 years of recorded American history is that Presidents are not kings… This means that they do not have subjects, bound by loyalty or blood, whose destiny they are entitled to control. Rather, in this land of liberty, it is indisputable that current and former employees of the White House work for the People of the United States, and that they take an oath to protect and defend the Constitution of the United States. Moreover, as citizens of the United States, current and former senior-level presidential aides have constitutional rights, including the right to free speech, and they retain these rights even after they have transitioned back into private life.

McGahn said tonight after the ruling came down that of course he’ll comply — if it’s held up on appeal, and he does expect an appeal. That makes the decision of limited use to House Democrats, at least in McGahn’s case, since an appeal will take months. But it would make the decision *very* useful if John Bolton is looking for an excuse to testify and seizes upon this as his pretext. “D.C. district court says there’s no such thing as ‘absolute immunity.’ See you on the Hill!”

Although then we’d just end up in a secondary dispute: Assuming Bolton does what Jackson imagines and refuses to answer certain questions during his testimony on grounds of executive privilege, we’ll have a new legal battle over whether his refusal to answer was legally warranted or not. How long would that court fight need to play out?

All of this is a long way of saying that whether Bolton and Mick Mulvaney ultimately testify before Democrats move to impeach is really a pure matter of their own willingness to do so, not any court ruling. Today’s decision gives them a fig leaf to claim that they’re now compelled by the conclusion to appear, but of course that’s nonsense so long as an appeal is pending. It’s up to them. Mulvaney obviously isn’t going to testify. Bolton … probably won’t either. Probably.

I’ll be interested to see what SCOTUS does with the question, though. The dispute is straightforward. On the one hand, if all sides agree that Congress can’t compel the president himself to testify as a matter of separation of powers, why should they be able to compel testimony from presidential aides to whom he’s delegated certain duties? On the other hand, how is Congress supposed to perform its constitutional role of checking the president if it can’t compel testimony from the people best informed about what the president is doing? The John Roberts Magic Eightball should be especially suspenseful in resolving that one.

If Eric Ciaramella is the 'Whistleblower', Then He, IG Michael Atkinson and Adam Schiff Must Be Questioned Under Oath Right Away

WATCH: Schiff Alienates Key Senators With Quote About GOP Heads 'on a Pike'