Trump: I stand with Hong Kong — but also with President Xi 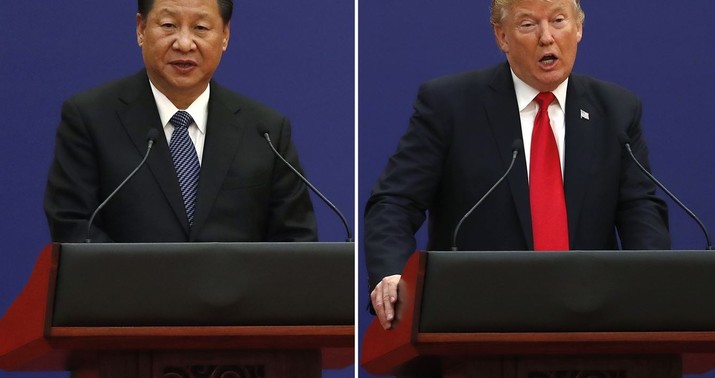 I’m pretty sure this is an either/or proposition. And if it isn’t, it will be soon.

Although it’d be sweet to see some “Stand with President Xi” merchandise in the Trump campaign store in the meantime.

That Winnie-the-Pooh-looking concentration-camp commandant doesn’t get enough solidarity from Americans, if you ask me.

As some have noted, it’s strange that POTUS would in the same breath praise Xi as an incredible guy and also claim that he needed to be talked out of murdering thousands of Hong Kong protesters. Then again, he’s locked in a sensitive trade negotiation with China and doubtless thinks a little flattery will help get him closer to the finish line. He might be right.

…But Congress has other ideas:

The House had previously passed a slightly different version of the legislation, both versions of which would require an annual review of the city’s autonomy from the Chinese mainland government and whether it is sufficient to warrant the special legal treatment Hong Kong receives from the United States. The bill would also allow sanctions on officials found to be responsible for human rights violations in Hong Kong…

Pro-democracy activists in Hong Kong have long urged American lawmakers to approve the legislation. The Chinese government on Wednesday slammed senators for passing it, arguing the legislation “neglects facts and truth” and “blatantly interferes in Hong Kong affairs and China’s other internal affairs.”

The Senate passed the same Hong Kong bill unanimously a few days ago, which means it’s headed to Trump’s desk for signature — with veto-proof majorities behind it in case he balks. It’s going to become law. Does Trump spare himself the embarrassment of having his veto overridden by signing the bill, or does he try to maintain a modicum of good relations with Xi by vetoing it and complaining about the override? The “Fox & Friends” hosts asked him that. He wouldn’t give them a straight answer.

Asked for comment, Ted Cruz’s office politely reiterated that the bill will become law whether Trump wants it to or not, irrespective of what that means for a trade deal:

It’s strange how bold Senate Republicans are about defying Trump on foreign policy given how timid they are about defying him on everything else. One might say that’s because voters don’t pay much attention to foreign policy, so the political pain from undermining Trump is smaller. Fair enough, but there are *big* domestic consequences potentially riding on this one. Trump’s counting on reaching a trade deal with Beijing before the election to give the economy a lift and ease the strain in agricultural states, where he has fans who are struggling after losing access to China’s market. If he gets an agreement, he can tout it as the biggest best most beautiful agreement ever and put his main economic liability behind him. Now here come Cruz and Pelosi and about 520 other legislators to roll a political grenade onto the negotiating table, and there’s nothing Trump can do to defuse it. If China walks away from trade talks, Trump will be on the hook for any ensuing economic deterioration. It could cost him his presidency next fall.

I wouldn’t worry much about it, though. Congress has passed foreign sanctions with veto-proof majorities before, after all. Trump responded in that case by signing the bill to avert an embarrassing override, then simply declined to enforce it. If he does that with China sanctions too, does anyone think Cruz or other Republicans will force the issue? Empty gestures are what Congress does best.

Whether he signs or not, there’s a straightforward reason for him to be leery of the bill: America first. Whatever he thinks of the Hong Kong protests, indisputably his first duty is to Americans. If reopening access to Chinese markets for American businesses means looking the other way at Chinese human rights abuses, hey. Wouldn’t be the first time the United States has handed an ugly regime a pass in order to advance its own interests. Trump’s just thinking about the bottom line.

Except Adam Silver and LeBron James were also just thinking about the bottom line in refusing to take Daryl Morey’s side when he tweeted in support of the Hong Kong protests and they got obliterated for their moral cowardice. Granted, that critique was partly aimed at hypocrisy: It wasn’t just that LeBron and Steve Kerr and Gregg Popovich refused to criticize gross Chinese human rights violations, it’s that they’re normally perfectly comfortable lashing institutions for lesser abuses here at home. Trump is many things but he’s no hypocrite when it comes to human rights; whether it’s Turkey smashing the Kurds or Putin assassinating journalists or Xi gearing up to do whatever he’s going to do in Hong Kong, the president is pretty uniformly untroubled.

Still, hypocrisy was only part of the criticism for the NBA. The core part was that it was repulsive to see American superstars straining not to take a side between China’s gulag state and the protesters for no better reason than that it served their bank accounts to do so. That’s … Trump’s situation exactly in “standing with President Xi.” Silver and James and Kerr etc. went to bat for one particular business whereas Trump’s going to bat for one particular business, so why did the NBA take a beating for putting money over morals whereas Trump doing it is no big deal, or even affirmatively good?

Anyway, exit question: Does he sign the bill or veto it?