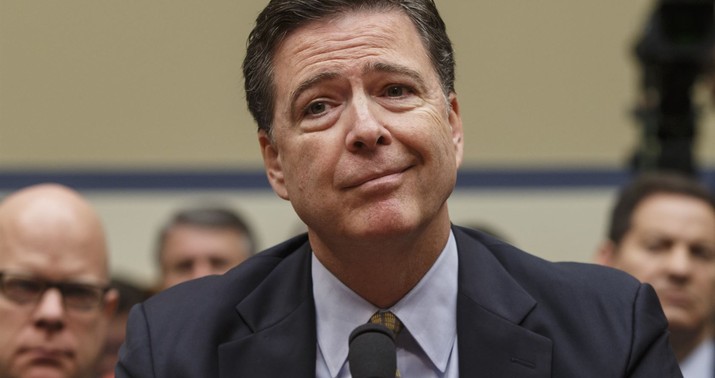 “The early accounts of the report suggest that it is likely to stoke the debate over the investigation without definitively resolving it, by offering both sides different conclusions they can point to as vindication for their rival worldviews,” says the NYT of what its sources are telling them.

How unusual for this political era.

There is some anti-Trump bias in the mix of misconduct here, according to those sources. Allegedly that came from FBI lawyer Kevin Clinesmith, whom the NYT identifies as the subject of the criminal investigation that John wrote about last night. Clinesmith supposedly altered an email written by an official at another agency, adding a factual assertion at the end to make it look like it had been written by the author. That altered email was then given to an FBI official to read before signing an affidavit that was part of the FISA submission against Carter Page. Clinesmith was also known to text things to friends like “viva la resistance” when asked if he planned to stay in government despite his disdain for Trump.

He’s resigned from the FBI and is now in a heap of legal trouble, as he should be. This solves the mystery, it seems, of why the Durham investigation is now a criminal probe. Maybe not the whole mystery — Durham could be looking at other people — but at a minimum Clinesmith has been pinched for altering the form.

The Times claims that Clinesmith was “low-level.” What about the high-level Russiagate personnel: Comey, McCabe, and Peter Strzok? According to the sources, there’s no allegation made that their work was influenced by antipathy to Trump. I’ve never understood why, if they were out to wreck POTUS, they wouldn’t have leaked something damaging during the campaign to try to blow him up on Election Day, but oh well. The IG did apparently find “sloppy and unprofessional” work in parts of the FISA application, including “errors and omissions in documents” (“the renewal applications contained information that should have been left out, and vice versa”), but no abuse of power. As for the other core conspiracy suspicions about Russiagate, no dice:

[T]he draft report also concludes that the F.B.I. had enough evidence to meet the legal standard for opening the investigation, though Mr. Horowitz emphasized that the bar is low, the people said.

The report is also said to conclude that Joseph Mifsud, a Russia-linked professor who told a Trump campaign official that Russia had damaging information on Mrs. Clinton in the form of hacked Democratic emails — a key fact used to open the investigation — was not an F.B.I. informant. That undercuts an assertion of conservative critics of the inquiry.

None of the evidence used to open the investigation came from the C.I.A. or from a notorious dossier of claims about Trump-Russia ties compiled by Christopher Steele, a former British intelligence agent whose research was funded by Democrats, the report concludes, according to the people briefed on it.

A big question: Were the “errors and omissions” in the documents so significant that the application wouldn’t have been granted otherwise? Vague answer:

The inspector general apparently did not assert in the draft report that any of the problems he found were so material that the court would have rejected the Justice Department’s requests to continue surveilling Mr. Page. But the people familiar with the draft were uncertain about whether Mr. Horowitz said the problems were immaterial, or instead avoided taking a position on that question.

Maybe Horowitz will answer that question in the final report, as this one’s still in draft. Although assuming the Times’s sources are correct about what it says right now, you wouldn’t expect major reversals on the key conclusions about bias, Mifsud’s role, etc. Surely the fact-finding stage of the IG process is over if the report, which is due in three weeks, is in its final stages. It could also be that this is an attempt by anti-Trump officials to “pre-spin” the final report by leaking only the parts that are most favorable to the FBI, although I don’t know what’s to be gained by that when we’ll have the full document in our hands so soon. If anything, dampening expectations now would make a bombshell about bias or misconduct in the final report burst even more intensely when it comes out.

WaPo is out with its own story about the draft report tonight that corroborates the Times’s claims, this time citing two U.S. officials familiar with the report. (Same sources as the NYT’s or different? Who knows?) The Post’s report is more forceful in describing IG’s conclusion about the opening of the Russiagate probe: “According to the two officials, Horowitz is expected to conclude that opening of Crossfire Hurricane was legally and factually justified.” That’s the core dispute — was the investigation in fact a set-up by a careerist intelligence community intent on fishing for dirt about a populist outsider president whose politics they despised, or was there actually a legit reason for sniffing around Carter Page and George Papadopoulos? Supposedly Horowitz will choose door number two.

Look at it this way, though: Considering that impeachment seems to be playing somewhat better politically for Trump than for Democrats, the 2020 boost he was hoping to get from the Horowitz report ironically might be delivered to him by Pelosi and Schiff anyway. And the Durham investigation is still live. Stay tuned.