White House tweet: Vindman’s own boss had concerns about his judgment, you know 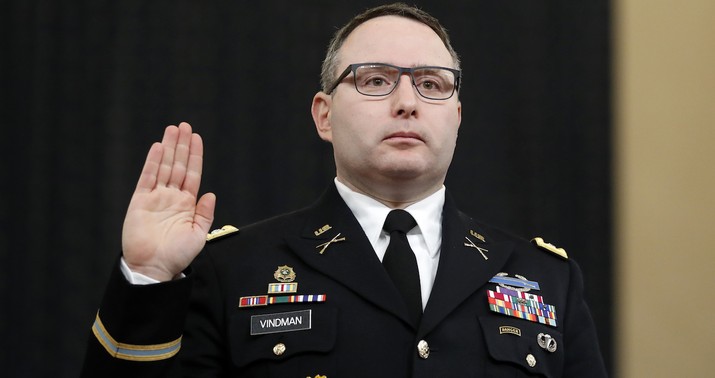 This is Vindman’s own fault. If he wanted the respect of the White House, he should have committed some war crimes while he was deployed.

Tim Morrison, Alexander Vindman's former boss, testified in his deposition that he had concerns about Vindman's judgment. pic.twitter.com/xwHOt4bsHS

Vindman answered that critique at the hearing by reading former Trump advisor Fiona Hill’s final performance review for him: “Alex is a top one percent military officer and the best Army officer I have worked with in my 15 years of government service. He is brilliant, unflappable and exercises excellent judgment.” Morrison is testifying this afternoon so presumably he’ll elaborate on his concerns about Vindman’s judgment.

Either way, it’s characteristic of Team Trump to attack Vindman needlessly when Republicans at today’s hearing were perfectly willing and able to do that for them. Vindman works for Trump in two capacities, as an Army officer and as a top advisor on the National Security Council. If John Bolton had questioned his abilities, doubtless Vindman would have been dismissed. So if his judgment were a concern, whose fault is it ultimately that that defective judgment was given such influence in national security matters? It reminds me of people saying last week after Bill Taylor’s testimony that Trump was hired by the American people to fire these no-good untrustworthy bureaucrats running their own agenda. Taylor was hired out of retirement by Mike Pompeo to serve in Ukraine. Most of the people testifying have been approved by the president’s own topmost advisors. The other witness this morning, Jennifer Williams, is an advisor to Mike Pence, for fark’s sake.

What’s especially stupid about the White House targeting Vindman, notes Tiana Lowe, is that they’re doing it at a moment when they’re trying to make hay of the fact that this was all started by an anonymous whistleblower. If you want to make the point that the whistleblower exploited assurances of anonymity to level a dubious charge at the president, why the hell would you retaliate against a different witness by denigrating him publicly — and not for the first time in the past seven days either? All the White House is doing here is proving that the whistleblower was right to fear that he’d be punished for reporting the Ukraine business.

The White House tweet just goes to show the ugliness of Trump’s retaliation and why whistleblowers are protected in the first place. Both Vindman and Morrison warned the White House about the Ukraine aid issue weeks prior to a single member of the public learning about it, and yet Vindman’s been attacked with a quotation taken out of context.

If Trump wants to fire Vindman, he can, and he should. But to publicly retaliate against him, threatening his employment in the hopes of scaring other potential witnesses out of speaking, is political malpractice.

Questioning Vindman’s judgment is actually tame by the standards of what he faced this morning. The exchange that got the most attention online was when the GOP’s staff attorney, Steve Castor, asked him if he’d ever been offered the position of defense minister of Ukraine. Why, yes, said Vindman:

That’s the Dan Scavino edit. Here’s the fuller exchange, in which Vindman says he never entertained the offer, found it “comical,” and reported it to his superiors — which, ironically, may be how the information became known to congressional Republicans and Democrats in the first place. Vindman blew the whistle on the offer himself:

Even so, that’s the best hit Republicans landed on him. It’s bareknuckle, in that the idea is to question whether a decorated U.S. Army officer like Vindman is truly loyal first and foremost to the United States; the Ukrainians who worked with him apparently thought that question was sufficiently in doubt that they felt it was worth approaching him, whether seriously or semi-seriously, about putting on their uniform instead. Unless there’s evidence that undercuts Vindman’s explanation, he dismissed it immediately and didn’t try to conceal it from his own chain of command, so the Ukrainians’ suspicions about his loyalty were unfounded. But if the theory is that Vindman was “concerned” about Trump’s call with Zelensky only because he’s a Ukrainian Firster or whatever and not because he thought “it was improper for the president to demand an investigation into a political opponent,” this is a peg that theory can be hung on. Apparently at least one Ukrainian official thought it worth testing Vindman’s loyalties, so strong was his support for the country.

Anyway, I continue to believe that Gordon Sondland is the only game in town on the Ukraine business. Vindman’s testimony was fine and all, if schmaltzy and theatrical at times, but Sondland, Mulvaney, Giuliani, and Bolton are the only people who seem to have had extensive direct communications with Trump about his intentions towards Ukraine and the military aid. And since the last three in that group aren’t testifying, it’s all down to the first one to deliver the goods. If Sondland is a bust for Democrats, Senate Republicans will have an easy time voting to acquit. Even Mitt Romney might hold his nose and vote not guilty.