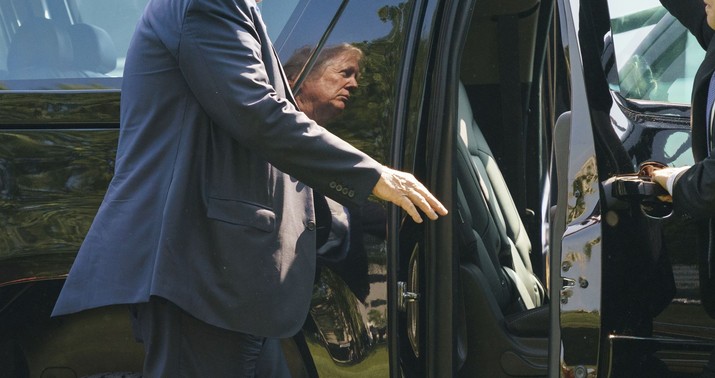 I realize that Democratic rallies next year are destined to sound like Republican rallies in 2016, with the crowd lustily chanting “Lock him/her up!” at the opposing party’s nominee.

What I didn’t realize is that that trend might also include dark suspicions about the true state of the nominee’s health.

Jazz wrote yesterday morning about the unusual unplanned visit Trump made to Walter Reed hospital on Saturday afternoon. Nothing to be alarmed about, the White House assured the public. He just decided to squeeze in part one of his annual physical since he had some time to kill. But, like Jazz said, why would anyone do a physical in stages? And why would it be done at Walter Reed when normally the president’s medical staff performs his physical in the White House?

And who has so much time to kill that they’d decide to fill a few empty hours with a trip to the doctor instead of with golf, lunch with friends, etc?

A “person familiar with the matter” added another strange detail in speaking to CNN. Normally when the president’s on his way to Walter Reed, the full staff is notified. They weren’t this time.

Typically, Walter Reed’s medical staff would get a general notice about a “VIP” visit to the medical center ahead of a presidential visit, notifying them of certain closures at the facility. That did not happen this time, indicating the visit was a non-routine visit and scheduled last minute.

The source said it was possible a small group of doctors involved in Trump’s medical exams were notified before Trump arrived at Walter Reed, but said all medical staff at Walter Reed would typically be aware if the President was arriving for a routine medical exam.

His two previous physical exams in office were announced ahead of time by the White House and noted on his daily public schedule, but a source with knowledge of the matter told CNN Saturday that the President’s unannounced trip to the medical center was not even on the President’s internal schedule as of Saturday morning.

Deciding to squeeze in a partial physical must have been really spur-of-the-moment if it wasn’t even noted as a possibility on his private schedule that morning. CNN also claims that a full physical for the president normally takes just four hours. Why split up a bloc of time that small instead of doing it in one shot on some weekend in the future?

A different source assured CNN that Trump appeared to be in good health the night before, but allowed that his trip to Walter Reed was “abnormal.” This tweet from last night is worth noting too:

The president’s unexpected visit to Walter Reed hospital was Saturday. He was not in public view today. Reporters are not expected to see him tomorrow either, per his public schedule: pic.twitter.com/QmBAtfbX9S

Trump has been tweeting frequently since Saturday and it turns out that he did squeeze in some business this morning that wasn’t included on yesterday’s public schedule, meeting with Fed chairman Jerome Powell. But there’s a curious detail about that too:

Why meet in the residence instead of the Oval Office?

The rumor on Saturday was that chest discomfort brought him to Walter Reed. That fits the facts better than the goofy “unscheduled physical” explanation, which is not to suggest that anything’s seriously wrong. It may be that he was stressed out (who would blame him as the impeachment process rolls on?), his blood pressure had climbed, and doctors at the White House decided to play it safe by taking him to the hospital. Maybe he’s been told to take it easy for a few days, which would explain his low profile since Saturday and his meeting with Powell in the residence. You can understand why the White House would want to hush that up, though, even though it’s no big deal: Although Trump is only a few years younger than Biden and Bernie Sanders (and a few years older than Elizabeth Warren), “high energy” is a key part of his alpha-male image. If the public comes to believe that he’s physically weak, it’ll neutralize the GOP attacks on Biden or Sanders (especially Sanders) next year that the Democratic nominee is too feeble to be trusted with the presidency. And it’ll give Dems an argument that Trump himself is no longer healthy enough to cope with the pressures of the job.

I’m kind of surprised that the story of what actually happened hasn’t leaked yet to the NYT and WaPo. We’ll see. Here’s Jeanine Pirro with White House spokesman Stephanie Grisham on Saturday trying to tamp down the rumors for the Fox faithful. Trump is almost “superhuman,” Pirro marvels.

Is the anti-Trump protest movement stalling?

“We do have a teensy bit of a reign-of-terror situation on our hands.”

'#CNNIsGarbage': CNN Was So Bad in the Last Democratic Debate That Even Progressives Attacked It

The Left's Great Lie Is a Pervasive Threat to Our Culture

'The stupid, it burns'! NBC News serves up steaming hot take about voting for Trump being 'unconstitutional'

Fifth Circuit to inmate: Don’t hand us no lines and keep your faers to faerself

“We decline to enlist the federal judiciary in this quixotic undertaking.”

Preening Pelosi trolls Trump on HBO: “You are impeached forever”

“The President was self-impeaching himself every day.”