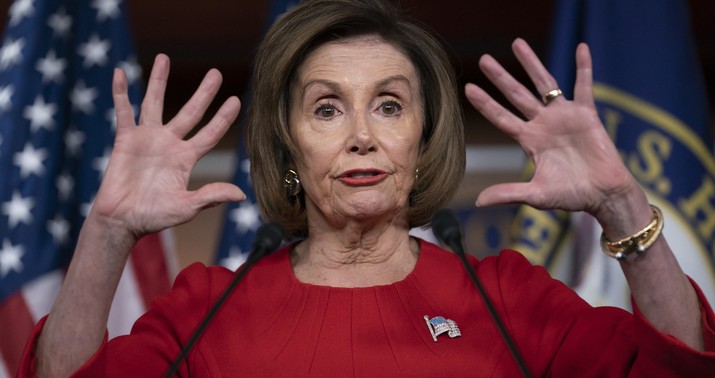 The topic du jour is just what you’d expect this Sunday morning, although in this case the chat shows are notable mainly for who’s *not* appearing. Normally an army couldn’t keep Adam Schiff away from an open invite to appear on TV but he’s not scheduled anywhere as I write this on Saturday. Neither is Republican Elise Stefanik, whose effective questioning of witnesses and blow-up with Schiff on Friday was the highlight of this week’s impeachment hearings for her party. Maybe they’ll be late additions.

Then again, they’re both busy these days.

Schiff may have decided that he could take the weekend off since a Democrat who outranks him is booked this morning. That would be Nancy Pelosi, who’ll talk with “Face the Nation” about the Kent/Taylor and Yovanovitch hearings and continue to push her party’s new focus-grouped message about what Trump allegedly did wrong with Ukraine. There are various Republican and Democratic members of Schiff’s Intelligence Committee who are also scheduled on various shows but the two officials most worth watching come from the Senate. That would be Ron Johnson and Chris Murphy, both of whom are set for “Meet the Press.” Why are they notable? Because they’re not just potential jurors in this case, they’re witnesses. They were part of a congressional junket to Ukraine in early September, right when the Ukraine matter was starting to blow up inside Congress, and met with Zelensky at the time. They’ll be asked this morning about what was said between them about the mysterious delay in Ukraine’s military aid.

If you’re bored with impeachment, try “Meet the Press” anyway. The latest Democratic presidential entrant, Deval Patrick, will be on to argue that his no-shot campaign actually has a shot after all. The full line-up is at the AP.

Republicans Note How Schiff Just Threw Nadler 'Under the Bus'

Somehow I think he doesn’t mind

WaPo: Dems may trade Hunter — or Joe — Biden for John Bolton after all

Plus documents to be named later?

Princeton historian: The 1619 Project is ‘built on partial truths and misstatements of the facts’ (Update)

“…which combine to impart a fundamentally misleading impression.”

Hillary Clinton: “How could we have known” that Weinstein was a monster?

Yes… how could you possibly have had a clue

One pinch Sullivan and a heaping helping of desperation.