Obama vs. Sanders and Warren: “The average American doesn’t think that we have to completely tear down the system” 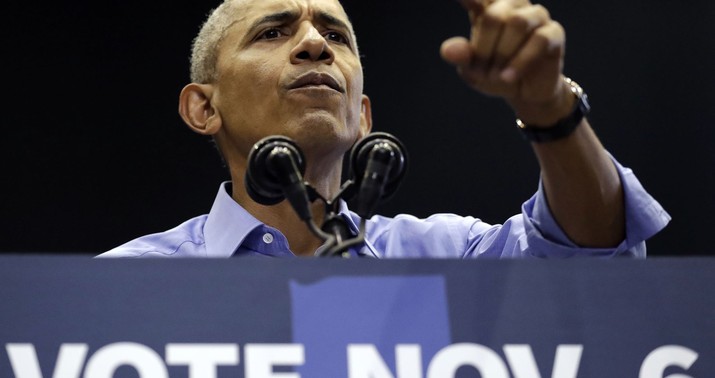 I am just not mentally prepared to see this guy, of all people, emerge as the person who strangles single-payer in its crib at a moment when lefties have not one but two top-tier candidates championing the idea in the primary.

I mean, I’m still recovering from learning that O told AOC and the other Dem House freshmen a few months ago to chillax a bit with all the government spending.

Trump might not be able to stop Medicare for All next fall but maybe [checks notes] Barack Obama can.

“This is still a country that is less revolutionary than it is interested in improvement,” Obama said [at a meeting with liberal donors]. “They like seeing things improved. But the average American doesn’t think that we have to completely tear down the system and remake it. And I think it’s important for us not to lose sight of that.”…

However, Obama also warned the candidates against simply standing pat and campaigning on his accomplishments. Instead, he argued, they should try to “push past” them with new ideas. He pointed to his signature health-care law, which has been a focal point in the contest, as a prime example, calling it a “really good starter home.”…

“My point is that even as we push the envelope and we are bold in our vision, we also have to be rooted in reality and the fact that voters, including Democratic voters and certainly persuadable independents or even moderate Republicans, are not driven by the same views that are reflected on certain, you know, left-leaning Twitter feeds or the activist wing of our party,” he said.

This dude might be more right-wing than Mitt Romney at this point.

The mild sneer at “left-leaning Twitter feeds” may seem surprising but Obama and his team have always low-key hated the sort of hardcore progressive activists for whom nothing short of outright socialism is satisfactory. His first press secretary, Robert Gibbs, complained loudly about the “professional left” in an interview all the way back in 2010 and then had to walk it back the next day. The rift was smoothed over, more or less, but that contempt bubbles up in public view every now and then. O’s recent criticism of the woke brigades can’t fully be understood outside that context, I think. He and John Boehner and Paul Ryan share this much: They all resented having unrealistic populist ideologues in their base carping at them incessantly that they’re not pure enough.

And naturally, the left resents his resentment.

Anyway, although he was tactful last night in not naming names, it’s hard to see this part as anything other than a direct shot at Bernie and Elizabeth Warren:

“I don’t think we should be deluded into thinking that the resistance to certain approaches to things is simply because voters haven’t heard a bold enough proposal and if they hear something as bold as possible then immediately that’s going to activate them,” he said.

That reminds me of the shot Biden took recently at Warren after she accused him of running in the wrong party’s primary because he’s skeptical that Medicare for All will work. Biden called that attitude “elitist,” paraphrasing it as “If you were only as smart as I am you would agree with me.” Obama’s not using those words but he’s making the same basic allegation, that certain candidates who shall remain nameless appear to believe that Americans are so simple-minded in their skepticism of M4A that all they need is a pep talk to convince them to rally behind it. (Which was also Beto O’Rourke’s position on gun confiscation, not coincidentally.)

Of course, Warren could — and will — respond that the same was said of ObamaCare. Part of the art of the sale in politics when you’re pushing big-ticket legislation is to convince the public that their worries about massive change are unfounded. Obama achieved that, partly by lying his balls off about how consumers certainly would be able to keep their current plan if they liked it once O-Care took effect. Coincidentally, Warren’s also taken to telling massive, egregious lies about the feasibility of her own favored boondoggle. “See, Barack? You and I aren’t so different.”

Anyway, can you imagine how crazy things are going to be by late February, after Biden and Sanders have underperformed in the early states and Obama decides he has to endorse Pete Buttigieg over Warren in order to save neoliberalism from the left? Oh — speaking of which!

Hoo boy. Soon Boot Edge Edge will be pushing “ObamaCare plus the public option,” which sounds like the sort of incrementalist plan to “push past” Obama’s own accomplishments that O alluded to in the excerpt above. Obama got elected as a young pol from the midwest with an ardent fan base among liberal intellectuals who sold himself to the public as a left-leaning pragmatist. In a way, Mayor Pete is his natural heir.

Exit question: Is Obama right that a candidate capable of attracting “persuadable independents or even moderate Republicans” is more likely to win than a candidate who can mobilize the left? Berniebros would tell you that those two qualities aren’t mutually exclusive. A candidate who can get progressives excited can also persuade independents, especially those white working-class voters in the midwest who handed the 2012 election to Obama and then handed the 2016 election to Trump. Counter Trump’s right-wing populism with a left-wing populist program and watch them return to the fold! We’ll see, but the electoral data says otherwise. Based on recent precedent, Obama’s right — if you want to maximize your chances of winning, centrists are the way to go.