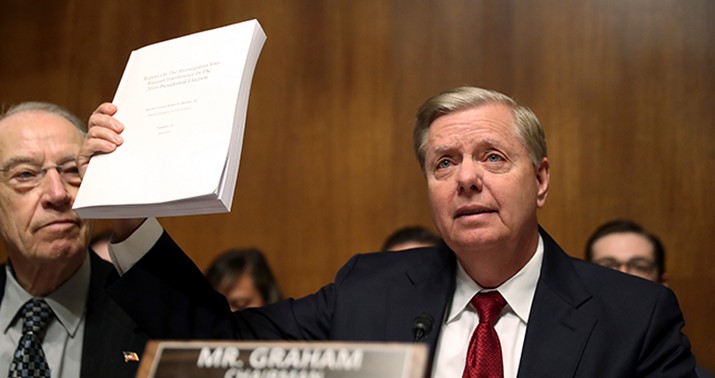 This is the same resolution that passed the House a few weeks ago 405-11, with lots of attention on the right paid to the fact that Ilhan Omar couldn’t bring herself to vote for it for some reason.

But maybe we were unfair. Why should Omar be singled out when Lindsey Graham can’t bring himself to vote for it either?

Five million people in the state of South Carolina, most of them Republicans, and somehow this guy is the best they can do.

Menendez noted that he listened to President Trump’s press conference Wednesday with Turkish President Recep Tayyip Erdoğan. The Turkish president scolded a House-passed resolution recognizing the genocide and instead promised to “establish a history commission.”

Graham objected to passing the resolution in the Senate, saying senators shouldn’t “sugarcoat history or try to rewrite it.”…

“I just met with President Erdoğan and President Trump about the problems we face in Syria by the military incursion by Turkey. I do hope that Turkey and Armenia can come together and deal with this problem,” he added on the Senate floor.

I can’t find a fuller transcript of what he said but I’m curious to know what he meant when he said the Senate shouldn’t “sugarcoat history or … rewrite it.” That’s the point of the resolution, that the truth is the truth even if acknowledging it will embarrass a U.S. ally. We don’t deny the Holocaust because it would make life easier for Germany to pretend that it didn’t happen.

I take it what he meant is that, yes, the Armenian genocide was a genocide but that America’s strategic interests come first. Germany has reckoned with its past so we can reckon with it too without risking our partnership. Turkey hasn’t, so we can’t. If whitewashing Ottoman crimes is the price of holding NATO together, hey.

The irony of Graham shilling for Turkish interests on the Senate floor is that he was reportedly tough on Erdogan when he and several other senators met with the Turkish president and Trump in the White House yesterday. Erdogan pulled out an iPad and showed them a propaganda movie about Kurdish terrorism. Graham saw right through it:

After the film concluded, according to the source, Sen. Lindsey Graham asked Erdoğan: “Well, do you want me to go get the Kurds to make one about what you’ve done?”

Erdoğan got into a heated back-and-forth with Graham over Turkey’s recent invasion of Syria, according to four sources familiar with the meeting. A source in the room said Erdoğan took exception to Graham using the word “invasion” and that Graham also rebutted Erdoğan when he claimed that Turkey had fought ISIS.

Trump will definitely cite that movie at some point as retroactive justification for pulling out of Syria. Graham also reportedly said this at the meeting:

From colleague John Roberts. Sources say Graham told Erdogan “You have done something no one thought was possible You have united the US…against you/Turkey.”

That seems … not quite true in light of his willingness to block the Armenian resolution later in the day despite overwhelming bipartisan support for it in the House. Anyway, as I say, he’ll justify blocking the Armenian resolution if asked about it on grounds that he’s thinking big picture in all of this, believing that the U.S. will have more leverage over Turkish policy by not inflaming a major “cultural sensitivity.” Read the press release he issued after the meeting, stressing his belief that Turkey didn’t need to act militarily to deal with its Kurdish problem and that a NATO ally should certainly not be installing Russian missile defense systems, as Erdogan plans to do. If you want them to leave the Kurds alone and not give Russia a major role in their national defense, tolerating their revisionist history about the Ottomans and the Armenians is the price.

But do note that many a strong Republican hawk in the House who also cares about Syria and Russia nonetheless supported the Armenian genocide resolution, with the likes of Liz Cheney and Adam Kinzinger among them. I assume Cheney would say that Graham has cause and effect backwards: If Turkey cares so much about American quiescence on the Armenian genocide, the time to worry about it is *before* it invades Syria and starts talking about missiles with Russia, not after. Graham’s position creates a perverse incentive in which the worse Turkey behaves, the more he needs to defend them in the name of saving NATO. Imagine if Erdogan were to start chattering about an alliance with China. Then we’d really have to whitewash Ottoman crimes in order to keep Erdogan happy.

At what point of Turkish misconduct do we stop doing them favors or looking the other way?

We’re probably overthinking Graham’s motives, though. When in doubt about why he’s doing what he’s doing, the safe assumption is that he’s shilling for Trump. It was probably Trump who told him to block the resolution in the Senate, knowing how awkward it’ll be for the president if it passes both chambers and then he’s forced to decide whether to sign it. If he signs, Erdogan will be furious; if he vetoes it, he’s complicit in Turkey’s revisionist history and he might have his veto overridden by Congress. Plus, Trump’s warm relations with Erdogan dating back to his days as a businessman are well known at this point, and seem to go beyond his usual soft spot for thuggish autocrats. The splashy NBC story published a few days ago about John Bolton claimed that it was the president’s behavior towards Turkey, not Ukraine, that was most suspicious to his former NSA: “Bolton said he believes there is a personal or business relationship dictating Trump’s position on Turkey because none of his advisers are aligned with him on the issue” of whether to sanction Turkey over its use of Russian missile defense. Maybe Trump told Graham he needed a favor on the Armenian resolution and Graham said “Okay, boss,” simple as that.

But you never know. Remember that Lindsey Graham is so bottom-line about U.S. foreign policy that he’s said in the past that it’s too bad the First Amendment protects Americans’ right to burn the Koran, given the way that sort of thing can be leveraged abroad as propaganda against the war on terror. Graham’s willing to sacrifice all sorts of principles in the name of projecting power. Forthrightly acknowledging genocide against the Armenians is a small one by comparison.

Somehow I think he doesn’t mind

WaPo: Dems may trade Hunter — or Joe — Biden for John Bolton after all

Plus documents to be named later?

Princeton historian: The 1619 Project is ‘built on partial truths and misstatements of the facts’ (Update)

“…which combine to impart a fundamentally misleading impression.”

Hillary Clinton: “How could we have known” that Weinstein was a monster?

Yes… how could you possibly have had a clue

One pinch Sullivan and a heaping helping of desperation.