Report: Mulvaney hinting to friends that Trump can’t fire him because he knows too much about the Ukraine process 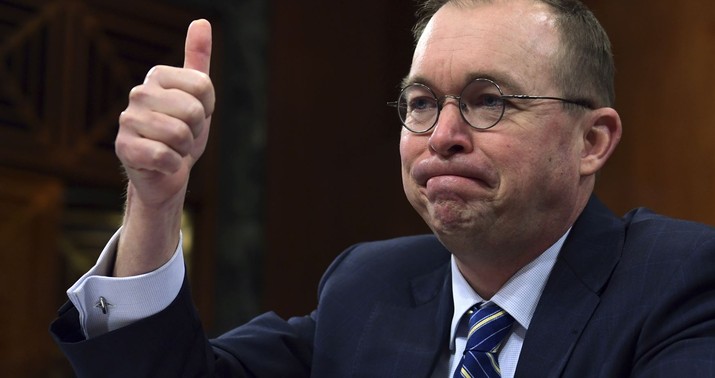 I wonder if this ominous little detail buried in a NYT story about tensions in the West Wing was leaked to the paper with or without Mulvaney’s approval.

At first blush, it’s … not the sort of thing a chief of staff might want his boss to know about. Privately threatening to rat out the president on an impeachable offense might put a damper on relations between the two, one would think.

But remember that Trump’s been candid about his frustrations with Mulvaney lately, and that rumors of Mulvaney being set up as a “fall guy” on the Ukraine matter are now loud enough to have made it into the pages of the Washington Post. Maybe this is Mulvaney’s version of a brushback pitch to Trump, informing him that he’s not going to be thrown under the bus without taking Trump with him.

Despite his own tenuous job status, Mr. Mulvaney has privately told associates in recent days that there is no easy way for Mr. Trump to fire him in the midst of the impeachment fight, the implication being that he knows too much about the president’s pressure campaign to force Ukraine to provide incriminating information about Democrats.

What might Mulvaney “know too much” about? One obvious possibility is that he knows in exquisite detail how Ukraine’s military aid came to be mysteriously delayed by OMB, the office Mulvaney still heads when he’s not busy with his chief-of-staff duties. If you missed it this weekend, read this post about the strange process via which the aid was ultimately released. Trump has said that he gave the order to transfer it to Ukraine on September 11 but various sources told Bloomberg that it was released by the State Department on September 9 after the department received some “top-level guidance” from the White House — which appears to be a reference to John Bolton. Bolton’s order reportedly “caught Mulvaney by surprise.”

Mulvaney might be able to confirm for House Democrats that it was in fact Bolton, not Trump, who ordered the aid released, which would undercut POTUS’s claim that there was no quid pro quo because he ordered the funds released before Ukraine did anything about the Burisma investigation. And obviously Mulvaney might be able to confirm who, exactly, ordered the funds delayed in the first place. Did “fall guy” Mick Mulvaney go rogue by blocking the funds without Trump’s authorization? Or did the president order him to block them?

And did the president happen to tell him why he wanted the funds blocked? Mulvaney famously admitted last month that an investigation into Ukraine’s role in the 2016 campaign was part of that calculus (he later tried to walk that back) but he hasn’t said that Burisma and the Bidens were part of it — yet. If the president’s own chief of staff were to testify under oath that, yes, he heard from Trump’s own lips that the military aid hold-up was part of a leverage play to get Ukraine to cough up something on the Democratic frontrunner, that would be … not great for the president’s defense. Even Lindsey Graham might pause for a moment upon hearing that before running off to do his next interview about how Trump’s phone call with Zelensky was perfect, completely untroubling.

Speaking of which, Axios is reporting today on a GOP memo on impeachment that zeroes in on four key pieces of supposedly exculpatory evidence, and which stresses a focus on Trump’s “state of mind” throughout the Ukraine process. But (a) not all of the evidence cited has to do with his state of mind and (b) betting everything on his state of mind is an incredibly foolish, even reckless move.

1. “The July 25 call summary — the best evidence of the conversation — shows no conditionality or evidence of pressure.”

2. “President Zelensky and President Trump have both said there was no pressure on the call.”

3. “The Ukrainian government was not aware of a hold on U.S. security assistance at the time of the July 25 call.”

4. “President Trump met with President Zelensky and U.S. security assistance flowed to Ukraine in September 2019 — both of which occurred without Ukraine investigating President Trump’s political rivals.”

None of that evidence is compelling. One: Trump mentioned a “favor” on the call with Zelensky before bringing up CrowdStrike, then went on to bring up the Bidens shortly after. It’s not hard to read that as him nudging Zelensky about a deal he wanted in the context of all the private conversations Giuliani and Sondland had had with Zelensky’s aides before that point. Two: Zelensky has indeed said there was no pressure put on him but he has no choice but to say that. His country’s independence from Russia may hinge on U.S. support. If he screws Trump on this, America might abandon Ukraine. Three: It’s true that Zelensky didn’t know about a hold at the time of the call but he found out quickly thereafter. By the time the aid was released in early September, the Ukrainians had known for a full month that their military aid had hit a mysterious snag. Four: As noted above, it was the State Department that finally released the aid, not Trump. Would Trump have continued to hold back the aid until Zelensky announced the reopening of the Burisma probe?

The weird thing about focusing on Trump’s state of mind is that that’s a defense on the facts, and the facts haven’t been great for Republicans. Ed noted elsewhere today that Bolton may have facts that will make the narrative even grimmer for Trump; in this very post I flagged something that suggests Mulvaney may have incriminating facts too. If the GOP goes all-in on the alleged purity of Trump’s motive, they could be undercut by new evidence at any moment. A smarter defense would be one based on the law, that what Trump did or knew is basically irrelevant since this just isn’t a high crime or misdemeanor. But Republicans are probably stuck with Trump’s own petulance here: He doesn’t want to hear them tell the world that what he did was bad but not impeachable, he wants them to say his call was “perfect” and he did nothing wrong. All they care about is acquitting him and moving on but he wants some sort of moral vindication, whether because he sincerely believes it’s fine to lean on foreign countries to investigate the Democrats or because, as a matter of mindless loyalty, when he tells the GOP to praise him he expects compliance.

Here’s a snippet from Nikki Haley’s “Today” show interview in which she politely criticizes Trump’s call with Zelensky while stressing that “in his mind” the president thought the call was perfect. I don’t know that the “he’s too stupid to be corrupt” defense is going to fly with you-know-who. “If his mind is sh*t you must acquit”?

"I think it's never a good practice for us to ask a foreign country to investigate an American." — Former U.N. ambassador Nikki Haley pic.twitter.com/DEvmz5CK37