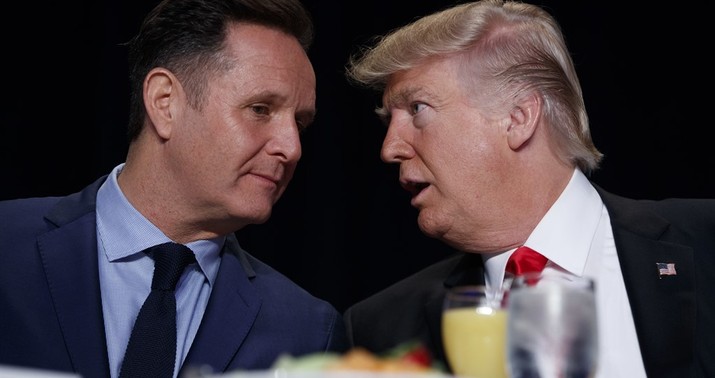 Supposedly he and Mark Burnett have kicked around something that would be called “The Apprentice: White House.”

Dude, “The Apprentice: White House” is what we’re all living in right now.

It’s reality. It’s not a show. It’s American politics as we know it in the year of our lord 2019.

How do you make a reality show after reality itself has become a show?

Anyway, this assuredly will not happen:

Since taking office in early 2017, the president has confided to close associates that he misses hosting The Apprentice and The Celebrity Apprentice on NBC, the reality-TV staples he left behind to become the Republican Party standard-bearer and then the leader of the free world. Trump has waxed nostalgic about how he created what he sees as the greatest thing reality television has ever seen. Two sources who’ve spoken to him recall Trump saying that he will perhaps one day revisit the medium…

One of the ideas kicked around by [“Apprentice” producer Mark] Burnett and the president was shooting a new version of the Trump-branded Apprentice, tentatively titled The Apprentice: White House, and to produce it shortly after the president leaves office. This time, however, the TV program would be explicitly politics-themed and take full advantage of Trump’s status as a former president of the United States and a newfound Republican kingmaker.

“There have been several discussions between Burnett and Trump about The Apprentice: White House,” a person with knowledge of the situation told The Daily Beast. “It is something Burnett thinks could be a money-spinner and Trump is very keen on doing.”

Another one of the knowledgeable sources said, “They actually talked about an Apprentice: White House,” but conceded that “as far as I know, the discussion did not go far.”

I’m intrigued by the concept of a political reality show, particularly the emphasis in the excerpt on Trump as kingmaker. The idea, I assume, would be to have aspiring young politicians compete in various tasks (policy proposals, speechmaking, etc) with Trump to formally endorse the winner in some local race. Are you a right-wing up-and-comer who wants to join the city council or state legislature in your red home state, only to find that you lack the fundraising and endorsements to draw public attention?

Well, now you have an option. Go on Trump’s reality show. If we could elect a game-show host president, surely we can make a game-show contestant a state assemblyman or whatever.

There are obvious problems, though:

1. Some voters — and politicians — would resent seeing public office turned into a game-show prize, with local MAGA fans blindly supporting whoever won Trump’s TV freak show. Maybe the winner of the show would get a contract as a Republican consultant instead?

2. Presumably the contestants would be exclusively Republican. That’s not necessarily a dealbreaker; Democrats would tune in just to hate-watch it. But it narrows the show’s appeal.

3. Trump would be risking his political capital by counting on the season’s winner to win the office he’s running for, if in fact that’s how the show worked. If the winner ended up losing to a Democrat in the general election or, worse, losing to another Republican in the primary, it would be searing proof that Trump had lost his influence with red-state voters. How would a show about Trump playing political kingmaker continue if he was no longer a political kingmaker?

4. Presumably “The Apprentice: White House” is in the works if and only if Trump loses next fall. If he has this in mind after a second term, he’d be darned old at that point — 78 on Inauguration Day 2025, with his 79th birthday in June.

Of course, there’s a way to solve that problem. If waiting until Trump is out of office is too long to wait, they could always … let him host the show while he’s president. I entertained that idea in a post a few years ago after the Schwarzenegger-led version of “Celebrity Apprentice” went belly-up and suddenly Mark Burnett was in the market again for a new host.

Let Trump himself host it again. I’m only half-kidding. It’s insane to think of the president of the United States carving out a few hours a week to do a goofball fake-business show, but if anyone would want to do it — just to show that he could — Trump would. He could resolve to donate all proceeds to charity and could reconfigure the show so that the contest involves public service work of some sort rather than private ventures. They could scale his role on the show way, way back, like a three-minute opening segment explaining that week’s challenge and then a five-minute closing segment in which he fires someone, and tape his bit in an hour each week. You’re sitting there reading that and thinking “that’s ridiculous,” which I know because I’m thinking it too, and yet — it’s possible, isn’t it? Anything is possible now.

Two and a half years later, anything seems even more possible. He wouldn’t even need to limit his role in the show in 2019 now. He could do a full taping schedule — “executive time” — while ignoring the advice about donating the profits to charity. If anything, he might demand a deal in which he gets half the global ad revenue.

If you’re sitting there thinking, “What about ethics rules?”, I would gently reply: You serious, bro?

What year are we in?

Anyway, I said up top that this will never happen — at least on broadcast TV — and I stand by it, for a simple reason. Who would air it? What makes anyone think NBC or some other network would be willing to take it on at this point? The Trump brand has taken a hit since he became president, to the point that the Trump Organization decided to remove the family name from a couple of ice rinks it operates in NYC in order to drum up business. There would be many potential viewers for “The Apprentice: White House” but the show would surely trigger one of the most ferocious left-wing boycotts in recent American history, involving 100 times the effort that progressives have mustered to scare advertisers away from Fox News primetime. If Kirstjen Nielsen is supposedly no longer fit for mainstream society, imagine how much more unfit a post-presidential show with Trump as the star would be.

I don’t even know that Fox television would air it. Fox News would, or OANN if it really came to that. But that’s where it would end up — as a curiosity of right-wing infotainment, not a major network primetime show.

Or … maybe he’ll make it the flagship show of his own right-wing infotainment network? Remember that Trump TV was supposedly talked about as a fallback plan if he lost the 2016 election and has reportedly been in Trump’s thoughts as recently as last month. If he loses next year, he could revive the idea and create “The Apprentice: White House” as its first program to turbo-charge interest. Imagine him going from the set of that show after taping directly to the set of some “Fox & Friends” knockoff so that he can rant on air for 45 minutes about how the election was stolen from him by illegal immigrant votes. I’d probably watch.

Perdue: We’ve got the votes “right now” to acquit Trump from the Dems’ Kavanaugh trap

Scott: Witness debate “has everything to do with removing at least four senators from office who are Republicans.”

What the hell was Hillary thinking, attacking Bernie on the eve of the Iowa caucus?

AOC has thoughts on capitalism, billionaires and power

“I don’t want your money as much as we want your power. The people, not me.”

Facial recognition is here. Everyone has to deal with that

For better or worse, here we go

Romney: I’m pretty cool with McConnell’s rules; Update: “If everything is an outrage …”

Schiff: “We can see why this resolution was kept from us …”

Schiff to Senate: Many Americans, maybe most, think you’re not going to hold a fair trial, you know

“There is no more hope for going forward.”

Guess how much San Antonio has spent to keep Chick-fil-A out of the airport?

We must fight the evil forces of tasty sammiches