Here we go: Jeff Sessions reportedly set to run for Senate in Alabama 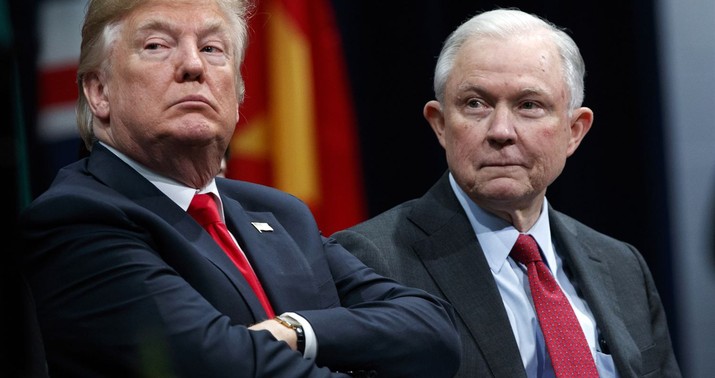 Rumors have swirled for months that he wanted to come back to Washington by retaking his old Senate seat. Those rumors got louder a few weeks ago, but I didn’t buy them. Then they got even louder a few days ago, and still I doubted. Why would this guy, who spent week after week as AG being lambasted by Trump and his fans for not suffocating the Russia probe, want to endure more of it? He wasn’t going to run.

And yet, he did conspicuously continue to kiss presidential ass in retirement. That’s the sort of thing one might do if one were considering a comeback.

And now, here we are.

Jeff Sessions is poised to announce his comeback Senate candidacy on Thursday, CNN has learned. He faces not only a GOP primary in Alabama, but also President Trump, who has never forgiven Sessions for recusing himself in the Russia probe. Is his fate in Trump’s hands?

The NYT has confirmed it. You may be digesting that and thinking that surely Sessions and Trump have privately healed the rift between them, as Sessions wouldn’t bother running in a competitive Republican primary with Trump-force winds against him. POTUS has been known to forgive underlings who’ve crossed him before, after all.

But you would be wrong:

Sessions faces a primary and, significantly, really unpleasant blowback from POTUS. Shelby has repeatedly tried to smooth the way for Sessions with POTUS over many months, but potus spent chunks of last weekend trashing Sessions, per advisers.

The smart strategic thing for Trump to do in the Alabama primary is … nothing. Attacking Sessions carries all sorts of risk. It’s possible that Sessions would win the primary despite Trump’s opposition, as the field is currently split five different ways and Sessions doubtless still enjoys some support in a state where he spent years winning elections. If Trump tried to stop him and lost — a test of strength in a “Trump state” — it’d be a total humiliation. And Trump has reason to believe that he might lose that test, given that he endorsed Luther Strange in the 2017 Alabama primary runoff and Republican voters ignored him and nominated Roy Moore instead.

Meanwhile, if Sessions did win the primary despite Trump’s opposition, Trump would be in a bind. Does he turn around and endorse Sessions in the general election against Doug Jones, which would be awkward and embarrassing for him? Or does he remain spitefully silent and risk having Trumpers boycott the general election to punish Sessions, risking an improbable Doug Jones reelection victory?

He’s better off staying out of it, or doing nothing more than endorsing one of Sessions’s primary opponents. But Trump is Trump and the prospect of sweet revenge is likely too much to resist, so yeah, we’re likely in for high drama and a test of strength. Here’s Trump in an interview just a few weeks ago:

You look at what’s happened to the absolute scum at the top of the FBI. You look at what’s happening over at the Justice Department, now we have a great attorney general. Whereas before that, with Jeff Sessions, it was a disaster. Just a total disaster. He was an embarrassment to the great state of Alabama. And I put him there because he endorsed me, and he wanted it so badly. And I wish he’d never endorsed me.

And here he is at an informal “roast” for House Republicans at a fundraiser last week:

Trump mentioned the Alabama Senate race, where former Attorney General Jeff Sessions is considering jumping in. “Question for Gary Palmer: who is gonna win Alabama? Don’t tell me Sessions. Is it gonna be the coach?”

“The coach” is former Auburn coach Tommy Tuberville, who’s running in the primary alongside Rep. Bradley Byrne and, of course, Roy Moore. Tuberville’s working hard to establish himself as the most loyal Trumpist in the race, with a spokesman saying last week of Sessions, “Alabama is not interested in recycling career politicians that have proven they aren’t tough enough to stand with President Trump.”

The punchline is that Trump’s going to go all-in to stop Sessions, Sessions will win anyway, and then he’ll immediately revert to being a completely obsequious Trump toady in the Senate again. Trump wins no matter what!

The president has discussed attacking Sessions with Senate Majority Leader Mitch McConnell (R-Ky.), and McConnell has shared that he also has concerns about Sessions running, according to people familiar with the matter. He has repeatedly denigrated Sessions to allies and White House aides in recent days.

Trump has even joked to senators and White House aides that he would move to Alabama and primary Jeff Sessions himself, two people familiar with his comments said.

They don’t elaborate on what McConnell’s “concerns” are but I’d guess it has something to do with Sessions potentially splitting the establishment vote with Byrne in the primary and allowing a populist to sneak through to victory — or two populists, like Moore and Tuberville, to make the runoff. McConnell is a bottom-line politician. He cares less about who wins than about making sure that whoever wins is a person who won’t cause trouble for him in the caucus. He may also be concerned about the scenario I described up top, that Trump’s involvement in the primary will alienate Sessions supporters if Sessions loses the primary or alienate populists if Sessions wins, giving Doug Jones a fighting chance at beating a divided GOP in the general.

If you want a little extra drama in all this, bear in mind that Trump will attend the Alabama/LSU game in Tuscaloosa this weekend, where the subject of his views on the Alabama Senate primary just *might* come up. Oh, and also bear in mind that the IG report on Russiagate and the Durham investigation are still percolating as Sessions wades into the Senate race. Anything in either report that’s unflattering to him might sink his chances instantly. In lieu of an exit question, here’s a little insight on how loyalties between Trump and Sessions might shake out among Alabama primary voters courtesy of a CNN panel discussion this morning.

“Nobody likes him, nobody wants to work with him, he got nothing done.”

Could the impeachment trial lead to recusals for John Roberts?

Beast Mode: McConnell Releases Trial Schedule And Dems Aren't Going to Like It

What I Saw At Lobby Day In Richmond