The state with the highest percentage of COVID vaccine refuseniks is...

You really covered yourself in glory this week, Wyoming. 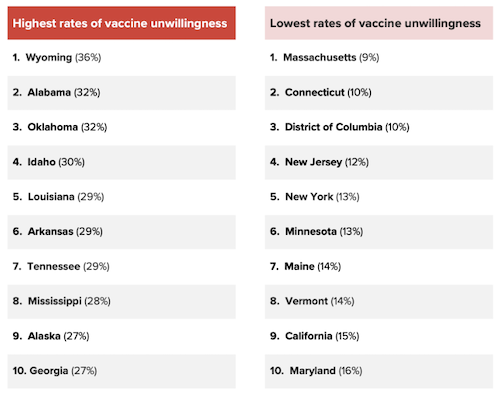 The right column is comprised entirely of blue states while the left column is comprised entirely of red ones — except for Georgia, which I suppose technically qualifies as blue for the moment given that it went for Biden and two Democrats in last year’s Senate runoffs. But let’s revisit that this fall, after Brian Kemp takes care of business against Stacey Abrams. Georgia may be the truest purple state in the union in 2022.

The vaccine data comes from this fascinating survey by Morning Consult, which has been tracking public opinion on the jab since March of last year. The most arresting single data point in the many graphs at the link has to be the fact that the percentage of refuseniks nationally has been rock steady since spring of 2021. It was 21 percent on March 15 of last year and it was 21 percent as of a few days ago. No amount of persuasion, no volume of data was ever going to flip that hardcore one-fifth of the population, it seems.

Most of the “plans to get vaccinated” group was converted into “vaccinated” over time, obviously. So was the lion’s share of the “uncertain” faction, which was 18 percent of the public in mid-March 2021 and is down to just six percent now. All in all, 71 percent surveyed said they were vaccinated.

Is that good by first-world standards? Not really — although we’re not that far behind other U.S. allies. 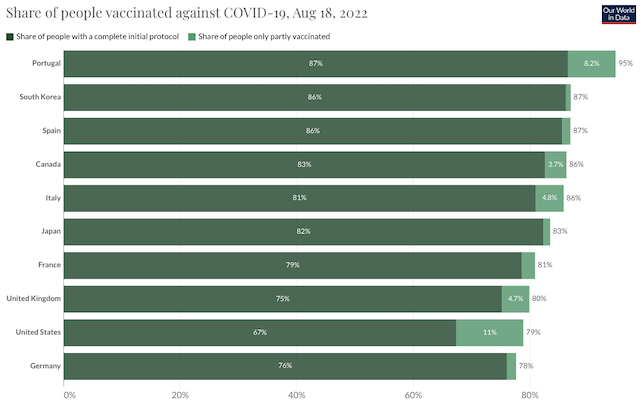 The weirdly outsized percentage of partial vaccinations in the U.S. numbers may be due to the fact that data is gathered and reported differently across a patchwork of 50 states and many counties, leading some who are actually fully vaccinated to fall through the recordkeeping cracks and “appear” to be only partially vaccinated. The 67 percent figure may be misleading.

Then again, it’s also misleading to analyze the U.S. vaccination rate as an integral national metric when in reality there are really two nations existing side by side with very different rates of uptake. Per Morning Consult, some 84 percent of Democrats are vaccinated; among independents and Republicans, just 65 percent and 63 percent are, respectively. There are also divides by race (72 percent for whites, 61 percent for blacks) and education (89 percent for postgrads, 83 percent for college grads, 63 percent for those who didn’t go to college). The red/blue divide is to some extent a function of a wider class divide, especially among whites.

Oh, and as you might expect, at-risk senior citizens are waaaaay more likely to have been vaccinated than young adults. Among those 65 and over, 87 percent are vaxxed. Among those 18-34, just 59 percent are.

As for very young children, hoo boy. These numbers from Gallup are stark:

All of the age differentiation is rational. Your young child has practically nothing to fear from COVID, raising the relative cost of side effects from the shot. Totally different calculus for grandma and grandpa.

I’m curious to see what sort of uptake there is next month when the new and improved vaccines tailored to Omicron and its subvariants begin rolling out. My guess is that many who’ve already had two or three shots are going to pass, concluding that COVID is no longer a meaningful risk. That’s not true — Americans are currently dying at a rate of around 500 per day, or 180,000+ per year — but it is true that this summer’s wave was markedly less severe than the waves of 2020 and 2021. And I’m using the past tense there advisedly. By every metric, the worst appears to be behind us: 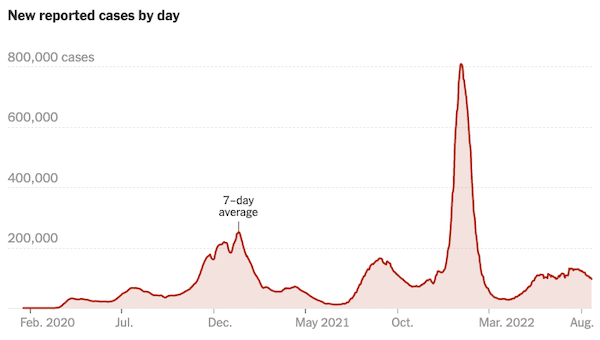 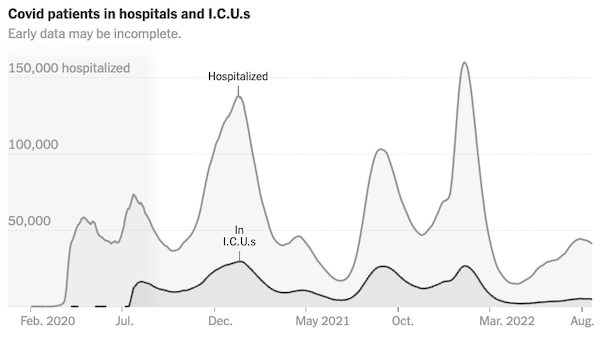 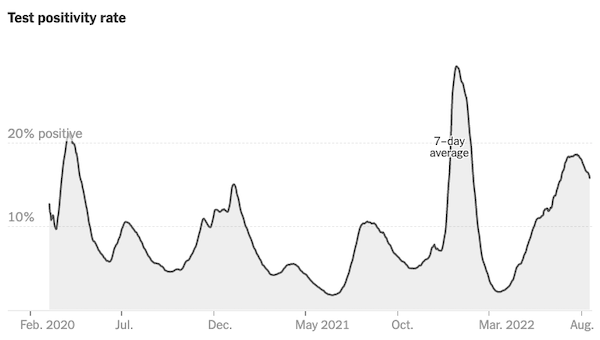 Cases, hospitalizations, ICU admissions, and positivity rate are all in decline. (Deaths are flat lately.) It’s hard to do apples-to-apples comparisons between surges in cases and positivity now with surges in cases and positivity in prior waves since rapid at-home tests weren’t widely available in those earlier waves. But although COVID is less “visible” than it’s ever been, it’s conceivable that there were more infected people this summer than there were during any previous stretch of the pandemic. That’s because not only are Omicron’s descendants insanely contagious, it turns out that most people who are infected don’t even know it. According to one new study of blood samples, among 210 people whose blood was found to contain COVID antibodies, just 44 percent had suspected that they had the virus at some point. Lotta asymptomatics walking around out there, spreading that BA.5 around.

I’ll leave you with this insanity from China as a rejoinder to those who say “you can never be too careful.” Uh, you really can.

Catch of the day! It doesn't matter if you're young or old, fish or crab – can't escape China's zero-covid policy and the nucleic acid tests. pic.twitter.com/stoqsGyYf1

'No One F***s With a Biden': POTUS' Trip to Florida Goes As Expected
Townhall
Tweeter risks wrath of some of America's most privileged lib journos in order to expose their efforts to hide their backgrounds from the public; UPDATED
Twitchy
FBI Raids Home of Pro-Life Activist, Demands Others Turn Themselves In
Redstate
5 Years After Las Vegas Concert Shooting, an FBI Whistleblower Reveals Probable Motive
PJ Media