Gotta be careful not to overinterpret this result, but it sure seems sub-optimal *if* the goal of public health officials is to alert gay men that they’re at special risk of contracting the virus.

But maybe that’s not the goal, even though it obviously should be. 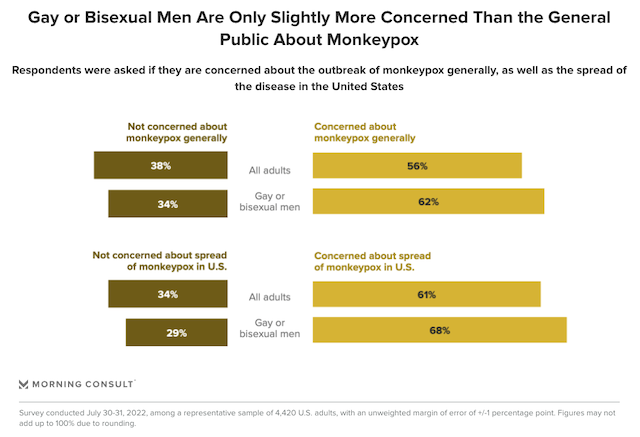 You can imagine explanations for that split that don’t depend on ignorance of how the virus is spreading. For instance, the fact that women and straight men are “concerned” about monkeypox doesn’t necessarily mean they’re concerned that they themselves will catch it. They might be concerned for gay friends. Or they might be concerned for the general population based on certain contingencies, like if the virus starts spreading outside of gay men’s sexual networks or if it somehow makes the jump to animals and begins spreading among wildlife, creating a domestic reservoir.

But given that something like 95 percent of monkeypox patients are gay men, you’d expect more of a gap in concern between the most at-risk group and the not-yet-at-risk wider population, right? So why isn’t there one?

I think it goes back to what I wrote about here. Officials are so worried about gays being stigmatized over the disease that they’ve gone out of their way to stress how it might spread potentially instead of stressing how it is spreading in fact. Straights can catch it too! And it doesn’t take sexual contact! Close contact where respiratory droplets or other fluids are incidentally exchanged can do it!

All true. But if 95 percent of the patients are gay men, bureaucrats might get more bang for their messaging buck if they made that fact plain. The point of public education about monkeypox is, or should be, to contain the virus; as such, a well-targeted messaging campaign aimed at the at-risk population should result in gay men being disproportionately savvier about how the virus is transmitted than the rest of the population is.

But again, that’s not what we see in the data: 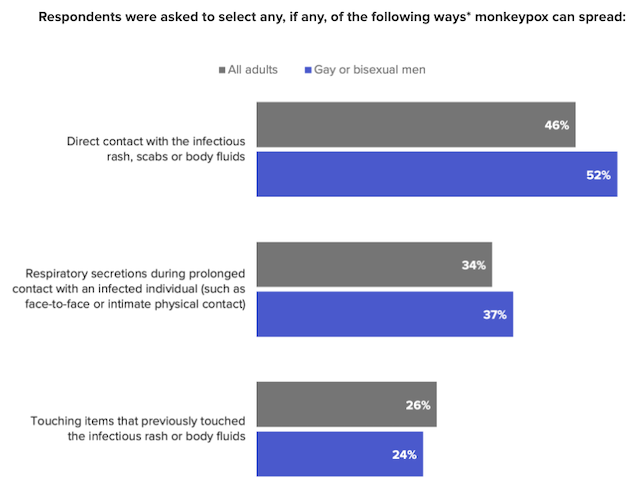 I’m not sure the results to the first question should even count. If you knew absolutely nothing about a particular disease and someone asked you whether you think you might be able to contract it by contact with an “infectious rash,” what would you guess?

The anti-stigmatization campaign is a double failure, causing gay men to lower their guard when their guard should be up and causing low-risk people to be on guard when they should chill out. The “it can affect anyone” message may have good intentions, but good intentions in this case have somehow produced a national outbreak of a disease that’s not very contagious and for which we already have a vaccine. Josh Barro wrote recently about a particularly cringy interview with a health official in Oregon who not only wouldn’t say frankly which group is most at risk from the virus but stooped to woke-speak while trying to talk around it. “In the United States, we know that people assigned male at birth who have sex with men and people assigned female at birth, including at least one pregnant person, have been affected by hMPXV in Oregon,” he told public radio. Imagine a gay man listening to that who doesn’t speak progressive as a second language trying to deduce whether he’s at special risk or not.

The irony of the hand-wringing over “stigma” is that the more the virus spread, the greater the risk of stigmatization becomes. If, after taking off within the gay community, monkeypox becomes an endemic disease that also routinely infects straights, some people will blame gays for not having done more early on to stop the spread. But because of the half-assed health messaging, many gays may not even realize that they’re more likely than straights at the moment to spread it.

Last week, journalist Benjamin Ryan declared that it’s time to give up hope for a sound, no-nonsense monkeypox message from the public health bureaucracy. Gay men are going to have to put the word out among themselves:

Centers for Disease Control and Prevention officials, including the White House’s new monkeypox deputy, Demetre Daskalakis, frequently play down the central role sex between men plays in monkeypox transmission and overemphasize the uncommon cases that transmit through other means. The agency can’t even bring itself to use the words “gay” or “men” in its monkeypox safer-sex materials…

However, this thinking also patronizes gay men as perennial adolescents determined to defy any whiff of paternalism regardless of the cost to themselves or the community at large.

Just as we gay men deserved to know our disproportionate share of the monkeypox case count at the start of this outbreak, we deserve the government’s best advice on how to protect ourselves now. But we cannot just stand by until public officials realize that, too.

There is some evidence that gay men understand they’re at higher risk. The Morning Consult poll shown up top may reflect similar levels of concern between them and the wider population about infection but gay men are notably more likely to say they want the monkeypox vaccine than the average person is. Adults generally split 38/31 on that while gay and bisexual men split 55/19. But even that proves the point of how poor the messaging has been about the risk from the virus: Barro notes that health officials have been far clearer in identifying gay men as being at special risk when offering the vaccine than they have when describing how monkeypox is transmitted. Gays who have heard about the vaccine do seem to understand that it should be a priority for them, in other words. But those who haven’t heard about the vaccine and are simply aware that monkeypox is spreading might have no clue that their sexual network is more likely to transmit it than the average person’s is.

In lieu of an exit question, go read this Times story about how Joe “Shut Down The Virus” Biden’s administration has botched the rollout of the vaccine. Quote: “The federal government’s distribution of monkeypox vaccine has been blemished by missteps and confusion, burdening local officials and slowing the pace of immunizations even as the virus spreads, according to interviews with state health officials and documents obtained by The New York Times.”

'No One F***s With a Biden': POTUS' Trip to Florida Goes As Expected
Townhall
Tweeter risks wrath of some of America's most privileged lib journos in order to expose their efforts to hide their backgrounds from the public; UPDATED
Twitchy
Biden Drops a Whopper About DeSantis and a Mafia-Like Comment That Has People Talking
Redstate
5 Years After Las Vegas Concert Shooting, an FBI Whistleblower Reveals Probable Motive
PJ Media