Dems, GOP, indies agree: Let's vote it out on abortion

I’m seizing the opportunity here to re-up my proposal for 50 ranked-choice ballot referendums next fall to settle this issue state-by-state for the foreseeable future. Have voters rank their preferences between a total ban, a ban after six weeks, a ban after 15 weeks, a ban after viability, and no restrictions. When the dust clears, we’ll have a truce in the abortion wars by dint of democratic legitimacy.

I think politicians in both parties would like that idea too. Possibly more Republicans than Democrats.

Ipsos asked Americans this week how they’d feel about a ballot measure in their state to decide the matter of abortion rights and found *big* support. In fact, the most enthusiastic cohort was GOPers. Which is surprising, since the position endorsed by the most fervent pro-lifers — a total ban — is likely DOA even in the reddest states. 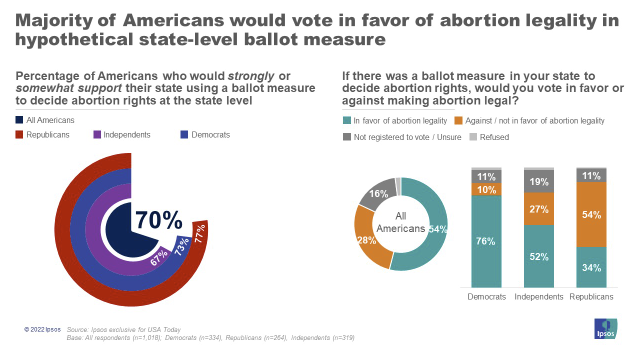 The second question is dumb inasmuch as a ballot initiative to decide whether abortion writ large should be legal wouldn’t tell us much about voter’s preferences. Something like 10 percent of the public favors making the practice completely illegal. The question for the states isn’t whether it should be legal, it’s at what point of pregnancy it should shift from legal to illegal.

But the first question is illuminating. Voters of all stripes are ready and willing to handle this matter at the polls. Why not let ’em?

One argument against doing so is structural. We have legislatures for a reason; why take this matter out of the legislature’s hands and put it in the people’s? We could concoct some answers to that, like “abortion is especially wrenching and divisive” or “views on whether a fetus is a person aren’t amenable to compromise the way, say, setting tax rates are.” But I think some legislators on both sides would resort to that structural argument if their preferred position seemed at risk of being undone by popular referendum in their state. If you’re an abortion-fanatic Democrat in a blue state or a total-ban Republican in a red one, the thought of voters opting for a 15-week ban at the polls should make you unhappy. Better to keep the matter in the hands of the legislature, where popular compromises can be avoided in favor of ideological absolutism!

Still, there would be some pols on both sides who I think could live happily with voters taking this matter into their own hands. For instance, for Democrats whose top priority is preserving a right to abortion in the first trimester (when 90+ percent of abortions are performed), a ballot measure is just what the doctor ordered. Voters in most states, if not all, would likely opt to delay any ban until after the first 12-15 weeks. And a Republican state legislature would be wary of overturning that result by passing a statute, knowing that undoing the will of a popular majority is a bad, risky look in a democracy.

For the same reason, I think there’d be lots of Republicans who — quietly — would welcome seeing voters take charge. The GOP knows it’s on the wrong side of the majority on the threshold question of whether abortion should be available on demand at any point of pregnancy. Having to somehow navigate between that majority and pro-life stalwarts in their base will be perilous. Handing the matter off to the electorate avoids that peril. Republicans in Congress would probably also be glad to see state voters hashing out their differences at the polls instead of having state legislatures lay down rules. That’s because, if the GOP takes over total control of the federal government in 2025, House and Senate Republicans will come under heavy pressure from the base to pass national abortion restrictions. That’ll be broadly unpopular, but it’ll be hard to say no if California’s fanatically pro-choice legal regime is being laid down by a far-left legislature and Gavin Newsom.

But if it’s being laid down by 40 million Californians in the voting booth? That’s the excuse congressional Republicans need to lay off. “The people have spoken. Federalism!”

There’s something else to bear in mind. Ballot measures on abortion are probably coming whether the GOP wants them or not, in which case it’s better to get them over with ASAP instead of in 2024. I’ve written before how the results in Kansas point to Democrats treating abortion referendums as turnout engines for future elections. The sort of disaffected young voter who doesn’t pay enough attention to politics to show up for the midterms might show up if abortion is on the ballot, and if they do they’re apt to vote for the pro-choice party. It’s too late for Dems to get those referendums on the ballot this fall but they’re surely already planning to have them on the ballot in 2024, to max out turnout in a high-stakes presidential election.

Which means Republicans have an interest in putting those referendums on the ballot in 2023 instead. Get the issue settled and off the table in an off-year and then they won’t have to worry about Dems leveraging the subject to get young adults registered and to the polls in 2024. If voters are destined to set abortion policy in their home states, it’s “the sooner, the better” as far as the GOP is concerned.