Imagine telling Democrats before Biden was sworn in that he’d have a string of successes shortly before the 2022 midterms that would cause his approval rating to surge to … 39.9 percent.

What would they have envisioned the first 16 months of his presidency to have been like to get him in a hole so deep that an uptick would still leave him short of the political Mendoza line?

Better yet, how modest would they have assumed his recent string of successes would be to not even push him over the 40 percent mark? In the span of a month or so, the White House passed a major climate-change package plus the CHIPS Act to boost America’s semiconductor trade, added Sweden and Finland to NATO to counter Russian expansionism, got a shockingly encouraging jobs report, and oh, right, even took out the leader of Al Qaeda. That’d be a solid first term by the standards of modern presidencies. For Democrats, it’s all happened in a matter of weeks.

And Sleepy Joe is still struggling to improve his numbers from atrocious to merely terrible, to give his party a fighting chance in November. 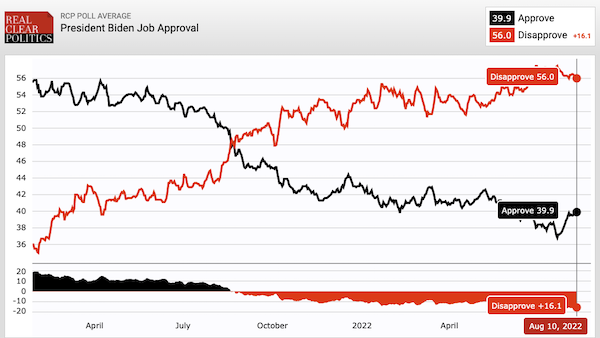 Ed cast a skeptical eye on Biden’s recent bounce in a post earlier, for understandable reasons. The gain in some polling is sufficiently modest that it can be dismissed as statistical noise. And despite having rebounded lately from a catastrophic sub-37 percent rating to a nearly 40 percent rating today, Biden’s disapproval numbers remain ugly at 56 percent. He didn’t reach that number for the first time until the end of June, but despite all of his good fortune lately, he’s still saddled with it.

There are a few things that give me pause before assuming that the Biden bounce isn’t real, though. For one, he’s notched 40 percent or better in the last three polls tracked by RCP, including 45 percent in Republican-leaning Rasmussen. The last time he did that in three consecutive polls tracked by RCP was mid-June. The other factor is that the Democrats’ generic ballot bounce really does seem legit: 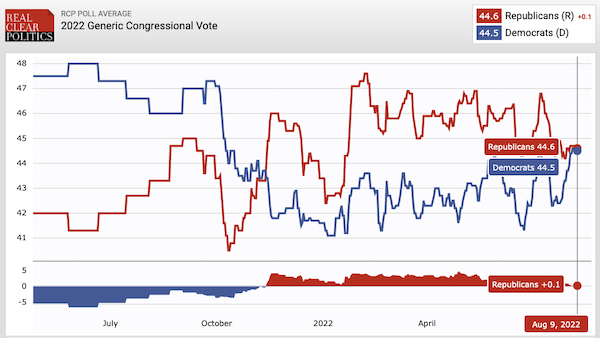 Apart from a short run of good polling last month, the last time Democrats were consistently at 44.5 percent or better on the generic ballot was back in early October 2021, long before voters started giving serious thought to the midterms. For the nine months that followed, Republicans beat Team Blue like a drum. Then the so-called hot streak began. And now, suddenly, we have a ballgame again.

Two months ago, if you’d asked someone to construct a narrative for you about how Democrats might shock the experts in November and overperform, they would have given you the same quizzical tilted-head expression that a dog does when it’s confused. There was no hopeful Democratic narrative. Between inflation, gas prices, and the dearth of any recent legislative wins, the left was demoralized while the right was spoiling for change. Now, however, it’s easy to imagine how Dems might do better than expected on Election Day. Nate Silver is looking backward from an imagined future:

Here's something I think about. Let's say Democrats somehow do hold the House this year. It's not likely, but it's also not impossible (~20% chance per 538 model). In 20 years, will people have a hard time explaining why it happened?

I think no, they won't. https://t.co/IiuAg9cVWO

Is Dobbs + Jan. 6 a "special circumstance" equal in magnitude to 9/11? That's a very apples-to-oranges comparison but I'd tend to say no; people forget how profoundly 9/11 changed public opinion. But is it comparable to Lewinsky? Certainly. It's bigger, I'd think.

I don’t expect a backlash to Roe to stop a Republican wave in the House, for reasons articulated here. But Silver’s right that if the wave breaks before coming ashore, that outcome will seem elementary — almost predictable — in hindsight. The end of abortion rights plus declining gas prices plus cooling inflation (maybe?) plus continued job growth drained just enough juice from the GOP and added just enough to Democrats to confound expectations.

Abortion is also a handy explanation for why Democrats are seeing meaningful improvement on the generic ballot while Biden’s numbers remain awful. That’s an issue that lends itself to “decoupling.” Your feelings about the end of Roe needn’t influence your feelings about the president, a figure with little influence over abortion policy in the U.S. except at the margins. But they might reasonably influence your preference as to which party should control the House to a great extent. If Republicans win the House and Senate this fall, they’re well-positioned to enact federal abortion restrictions in 2025 if they can win back the presidency. As such, a pro-choicer with little regard for Biden might suddenly believe with some urgency that he or she needs to turn out for Biden’s party this fall.

A safe prediction, then: Whichever party wins the “narrative” on election night will overreach in its abortion policies next year. If the fundamentals end up propelling the GOP to a wave despite strong resistance from pro-choicers, state Republicans will conclude that bans aren’t a political loser and will press ahead. If instead Dems do better than expected, they’ll decide that abortion absolutism carries no penalty and will resist measures at compromise on gestational limits after the first trimester. Each party will have to lose some elections to force them to the middle. In three months we’ll know who’s forced to make the first move.

The GOP Is Expecting Payback Post-2022
Townhall
Tucker Carlson speaks at funeral for founder of the Hell's Angels and breaks Leftist brains
Twitchy
Woman's Disturbing Reaction to Man Calling Her out for Wrongdoing Shows an Infantilization of Society
Redstate
Rest in Pee: Miscreant Caught Urinating Every Morning on Grave of Ex-Wife He Abandoned Decades Ago
PJ Media