Following legislative wins, Dems plot to "keep Biden in the spotlight" for some reason

I’m trying to think of the last president in my lifetime whose party reliably benefited from him being on camera. Maybe Bill Clinton? Dubya was generally a net positive for the GOP during the 18 months or so following 9/11 but that faded quickly enough after Iraq. And Obama, Trump, and now Biden all struggled with middling or poor approval ratings for much of their presidencies, seeming to irritate the out-party with their public appearances more than they gratified their own.

You might think there’s a lesson there. Since the president in our hyperpartisan age tends to be a better recruitment tool for the opposition than for his own side, one way to improve his party’s fortunes is for him to just … go away for awhile. Lie low. Let voters refocus their attention on what’s happening in Congress, which they may find more to their liking than the president’s agenda.

And you might think that would be especially true three months out from a midterm when the president is weighing down his party with a job approval score that still looks pitiful even after a “hot streak” of accomplishments lately. 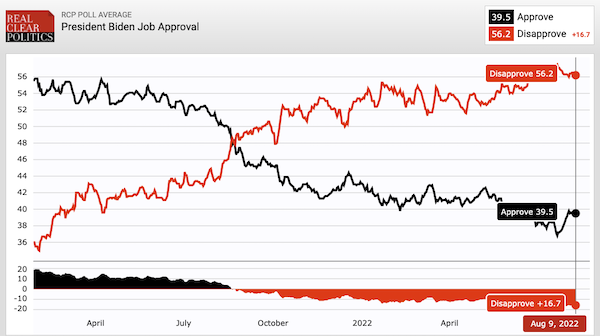 Remember “decoupling”? That’s the idea/hope that voters might compartmentalize their dour view of the president and proceed to back his party in downballot races. The last few weeks have presented Dems with an impromptu exercise in decoupling — and it’s paid off richly. With Biden sidelined due to COVID, they got the CHIPS Act done, then turned right around and passed the Inflation Reduction Act. Biden made few public appearances except to announce the death of Ayman al-Zawahiri, an undisputed victory. They also got the veterans’ burn-pits bill through, ratified NATO’s expansion to include Sweden and Finland, saw Kansas voters tilt lopsidedly pro-choice, and then had BLS drop a blockbuster jobs report in the country’s lap that called the “recession” forecasts into question.

Apart from the Zawahiri mission, President 38 Percent had little to do with any of it, at least publicly. In fact, the final iteration of Build Back Better came together only because the White House sat back and let Schumer and Joe Manchin sketch out a deal among themselves, with no outside irritants like Ron Klain meddling in the process.

You know that “Seinfeld” episode where George concludes that all of his instincts are wrong, and that if he does the opposite everything will work out well? That’s the last three weeks of American politics. Instead of the president trying to lead Congress by the nose towards some desired policy end and bumbling into failure, he got out of the way. And now his party is tied on the generic ballot.

Obviously the thing to do amid this sudden run of success is to start putting Joe Biden on camera again. Wait, what?

“[J]ust as the president is hitting his stride, culminating later this week with a major tax, health care and climate change bill, he’s preparing to set off for a long-planned and weeks-long family vacation,” notes Politico, sounding almost disappointed. Biden going on a long vacation is fantastic news for Democrats, an opportunity to hand the messaging baton to more capable and less disliked messengers in the administration. But rather than capitalize, they’re planning to steer him back into the spotlight. Why?

Now, they are plotting how to keep Biden in the spotlight — at least intermittently — while he’s away on holiday before he begins the fall campaign in earnest. Alterations are being made to those vacation plans.

Biden chose to stay at the White House Tuesday to sign a bill subsidizing the semiconductor industry and bolstering U.S. competition with China. He’ll sign a bill on veterans’ health before leaving town on Wednesday. His aides tentatively plan to hold another signing event between two vacation stops: Kiawah Island in South Carolina and in Rehoboth Beach, Del. That ceremony, the timing of which remains influx, would hail passage of the climate and health care bill, known as the Inflation Reduction Act, through both chambers of Congress and would provide a ready-made moment for autumn campaign ads.

One aide, who was provided anonymity to speak candidly, gloated at the recent change in fate, even re-appropriating the common MAGA euphemism for “F— Joe Biden” in a similar way that Biden’s Democratic predecessor, Barack Obama, turned the tea party’s derisive Obamacare slur into a liberal campaign slogan.

“We kept hearing ‘Let’s go Brandon,’” the White House aide said, “so we did.”

I suppose signing ceremonies where Biden doesn’t have to talk, or to talk much, aren’t so bad. I understand the Dems’ dilemma here, which is the same dilemma every administration faces every year with the State of the Union address. The SOTU sucks, no one enjoys it, and it’s forgotten within three hours — but free face time with tens of millions of voters is a “bully pulpit” perk that simply can’t be forgone. Democrats are desperate for ways to highlight their recent legislative achievements to tuned-out voters and a signing ceremony featuring the president is easy airtime on the evening news. They kind of have to do it.

But they don’t have to have Biden out in front of the cameras frequently once he’s back from vacation. The man won the presidency by campaigning from his basement; a low profile suits him. Instead, what they should do is invite members of Congress from swing states or swing districts to the White House to brief the press on certain key legislative gains. If they’re worried about holding Georgia and Arizona, have Raphael Warnock and Mark Kelly come to the briefing room to tout the benefits of letting Medicare negotiate drug prices. Bring in Elissa Slotkin and Abigail Spanberger to talk about how the Inflation Reduction Act is supposedly going to reduce inflation. Seeing swing Dems substituting at big PR availabilities might encourage voters to “decouple” Biden from the rest of the party. No one wants thousand-year-old Sleepy Joe back in office when his term is up, but Mark Kelly? Independents might be able to live with that.

Normally this would be a perfect moment for the vice president to step in and help with the messaging, but … yeah.

Exit quotation from Dem Rep. Dina Titus: “I can kind of feel it on the streets, that there’s some change in momentum.” We’ll see.

Darkness at Dune: The Nightmare of Martha's Vineyard
Townhall
Tweeter risks wrath of some of America's most privileged lib journos in order to expose their efforts to hide their backgrounds from the public; UPDATED
Twitchy
Biden Drops a Whopper About DeSantis and a Mafia-Like Comment That Has People Talking
Redstate
5 Years After Las Vegas Concert Shooting, an FBI Whistleblower Reveals Probable Motive
PJ Media