Dem strategist: DeSantis is a "scarier prospect" than Trump

“Scarier” how? “Scarier” as in “more frightening in his political beliefs”?

Yeah, I don’t think so. The bar there is high, my dude:

It turned out that the generals had rules, standards, and expertise, not blind loyalty. The President’s loud complaint to John Kelly one day was typical: “You f***ing generals, why can’t you be like the German generals?”

“You do know that they tried to kill Hitler three times and almost pulled it off?” Kelly said.

But, of course, Trump did not know that. “No, no, no, they were totally loyal to him,” the President replied. In his version of history, the generals of the Third Reich had been completely subservient to Hitler; this was the model he wanted for his military.

That anecdote, featured in the New Yorker today, is destined to become a classic example of the MAGA two-step. First: Deny that Trump would ever say or do the thing he’s accused of. Second: If the accusation is corroborated, insist that he was right.

I’m agnostic about whether the exchange with Kelly ever took place. But if Congress proposed changing the U.S. military’s oath of loyalty from an oath to defend the Constitution to an oath to obey President Trump, I doubt the White House would complain too loudly.

“To me, DeSantis is the scarier prospect,” one Democratic strategist said. “He’s a smarter version of Trump, he’s way more strategic, and he doesn’t have a hundred lawsuits at his feet.”…

“What’s inexplicable to me is, why — not just Joe Biden — but the entire Democratic establishment isn’t trying to disqualify him now in the governor’s race,” said Fernand Amandi, a Miami-based pollster and consultant whose firm helped Barack Obama’s presidential campaign win the state in 2008 and 2012…

“Biden has to spend more time in Florida, taking on DeSantis, and not giving him the complete stage,” the strategist said. “We can’t be surprised when he suddenly emerges as the favorite of the party because we see this train coming.”

A friend and I were chatting this morning about why some righties were bending over backwards on Twitter to defend DeSantis for his indefensible decision to campaign for election truthers like Doug Mastriano and Kari Lake. It’s because they’re desperate for an alternative to Trump, he claimed, and so they strain to excuse every misstep DeSantis makes in order to protect his viability. I think that’s right — for some. But for others, it’s a pure calculation about which candidate is more likely to advance the party’s interests. If your sole goal in politics is seeing Republicans amass power, which candidate gets you closer to that? If you could convince those people that the answer is Trump, they’d ditch DeSantis in a heartbeat and go full MAGA.

But it isn’t Trump and they know it. A guy who’s never reached 47 percent of the popular vote, who was impeached twice, and whose last major act in office was trying to overturn a national election isn’t the “electable option.” For the type of person I have in mind, Trump vs. DeSantis is a pure electability question. And DeSantis wins that contest hands down.

In theory. In practice, he still has to prove it by coasting to victory this fall. Strangely, despite Florida being America’s third-biggest state and the launching pad for a potential DeSantis presidency, there have been no public polls there in six months(!). One assumes that DeSantis is cruising thanks to inflation and the strong support of Florida’s Republican majority, but between the backlash to Roe and the gains Dems have made on the generic ballot lately, it’d be nice to have confirmation. Presumably we’ll get some surveys next month as the midterms heat up. Until then we’re forced to rely on private polls, like this one from a Democratic shop — which looks solid for DeSantis: 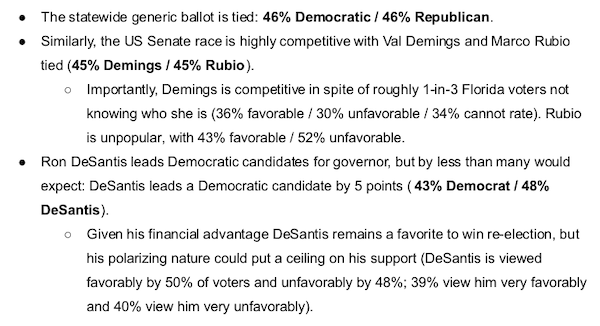 A five-point lead against a former governor who has 100 percent name recognition is a decent place to be, especially since DeSantis is running ahead of both the Republican generic ballot and Marco Rubio. Rubio ended up easily overperforming his polling the last time he ran for Senate, winning by nearly eight points after he was predicted to win by less than four. That’s in keeping with pollsters’ habit of underestimating Republicans in Florida in recent years. My guess is that Rubio will end up beating Val Demings by four or five; if so, a five-point lead for DeSantis in the Democratic poll above might point to a victory in the high single digits on Election Day. Which would be a huge feather in DeSantis’s cap on electability.

The only ways he might potentially get untracked are if he stumbles into a feud with Trump, which is unlikely, or if Roe being overturned turns out more Democratic voters than expected, which is more likely. I wrote about that on Saturday, in case you missed it. DeSantis is less exposed than most Republican governors are to a pro-choice backlash thanks to Florida’s comparatively moderate new 15-week abortion ban. But he’s not completely unexposed. Or at least that’s what Andrew Warren’s defenders are hoping.

'No One F***s With a Biden': POTUS' Trip to Florida Goes As Expected
Townhall
Tweeter risks wrath of some of America's most privileged lib journos in order to expose their efforts to hide their backgrounds from the public; UPDATED
Twitchy
Biden Drops a Whopper About DeSantis and a Mafia-Like Comment That Has People Talking
Redstate
5 Years After Las Vegas Concert Shooting, an FBI Whistleblower Reveals Probable Motive
PJ Media