“‘If [Cain] can explain a 9 percent sales tax so people decide they want it, he has a good chance to be the nominee,’ said Gingrich on CNN’s State of the Union with Candy Crowley…

“‘If, however, in New Hampshire, for example, where they have no sales tax at all and no mechanism for collecting it, or in Iowa where senior citizens are going to say, wait a second, as my 79-year-old mother-in-law said on her Social Security, in her fixed income she’s now going to pay 9 percent more? … As people look at 9-9-9 and disaggregate it, it gets to be a lot harder sale, I think,’ Gingrich told Crowley.”

“Former Godfather’s Pizza CEO and Republican presidential candidate Herman Cain on Sunday disputed a Washington Post report that his ‘9-9-9’ tax reform plan would raise taxes on poor and middle-class Americans, but acknowledged that some would see a tax hike under the proposal.

“‘Some people will pay more, but most people will pay less,’ Cain said during a lengthy interview on NBC’s ‘Meet the Press.’ He said that ‘the people who spend more money on new goods’ would see the amount of taxes they pay rise under the plan, which would replace the current tax code with a nine percent corporate income tax, a nine percent personal income tax and a nine percent national sales tax. The elderly would see their taxes fall, Cain said, because the capital gains tax would be replaced and and ‘tax on dividends and tax on income generated from investments, you only pay once.'”

“‘That’s a joke,’ Mr. Cain told the journalist David Gregory during an appearance on NBC’s ‘Meet the Press,’ where he was asked about the electrified fence. ‘That’s not a serious plan. I’ve also said America needs to get a sense of humor.’

“Mr. Cain’s attempt to pass off incendiary comments as nothing but a joke may take more effort, however. In making the initial remarks about an electrified fence killing illegal immigrants, Mr. Cain was detailed and repetitive. He did not introduce his thoughts as anything but serious commentary, beginning with the words, ‘We have a crisis of illegal immigration.’

“And the crowds responded with cheers, not laughs.”

“When pressed for answers today on Iran, Afghanistan and Iraq, the best Cain could do was to repeat his mantra that he would consult experts and then figure it out. Which is to say, he knows he hasn’t a clue but hopes no one will care. Durng the program, Cain admitted he had no familiarity with the neoconservative movement. While being a subscriber to COMMENTARY isn’t a requirement for the presidency, that someone running for that office has not even heard the term suggests Cain is not only bereft of foreign policy experience, he apparently has never even read much about it…

“The point about Cain’s ignorance is not just that it’s noteworthy, not to mention faintly ridiculous, to have a person running for president for whom the debates and the ideas behind the great struggles of our time are a mystery. It is that it is impossible to trust such a person to do the right thing if elected. Cain’s mind is clearly a blank slate when it comes to having the knowledge to make the life and death decisions one faces as president. We would have to trust providence that the experts he listened to would correct his ignorance.”

“All Cain needs to do is: run a real campaign in early states, fix the flawed economic plan that is the totality of his message (in part because the conservative base will never go for a regressive sales tax), explain why he had exactly the same position as Mitt Romney on TARP (which the conservative base loathed), learn something about foreign policy (and presumably support needed defense spending and reject isolationism) and stop making ‘incendiary’ statements that make him sound like a crackpot. Simple enough. And then he can wrap this baby up…

“In 2008 Americans elected someone they found charismatic (I never got that, but many did) but who was an incompetent ideologue selling snake oil by the barrel. It would seem what the GOP and the country need to dig us out of President Obama’s mess is not an un-Rubio or an un-Ryan but an un-Obama, a leader who understands our international threats and can weave together serious domestic reforms equal to the challenges we face at home. Conservatives may have antipathy toward Mitt Romney (or be unresponsive to the red-hot intensity of Rick Santorum), but let’s not pretend that Cain is the real deal. We are talking about the presidency and the fate of America’s economy and national security, for goodness’ sake.”

“[H]is open ignorance of less central matters of foreign policy, like the course of troublesome U.S. ally Ubeki-beki-beki-stan-stan, seems almost a point of pride. He’s said he likes the views of George Will and Charles Krauthammer, who disagree sharply on pretty much everything past the water’s edge. (This is more or less as illuminating as saying you like to read Keynes and Hayek.) All the available evidence suggests that Cain ‘hasn’t the faintest clue,’ Dan Drezner wrote yesterday, and it’s hard to disagree.

“There’s also something almost quaint, ’50s-ish about his invocation of ‘experts,’ as though there were a professional expert class that wasn’t deeply divided by party and ideology. Even in foreign policy, last redoubt of the wise men, that isn’t really true any more.

“Except, perhaps Cain isn’t really wrong. For all the Washington bomb-throwing, President Obama’s foreign policy has been characterized by continuity with President Bush’s, from Iraq to Afghanistan to Africa, not with any sharp break. The foreign policy elites don’t get along, but with the occasional dramatic exception — the Iraq invasion was that — they generally wind up giving similar advice. President Cain will probably be O.K.”

“‘In the field right now, he’s the most like me,’ said Jimmy Hoppers, a 60-year-old physician from Jackson, who was hoping to meet Cain so he could hand deliver a $1,000 donation to his campaign. ‘He’s run a business and paid the bills. He’s authentic.’…

“‘I love him,’ gushed truck driver James Bland after Cain spoke. ‘He doesn’t talk down to you. I think he gets the working man.’…

In a year of anti-government fervor, Cain is casting himself as the anti-politician Main Street candidate who would bring common-sense business know-how to the bureaucratic thick of Washington. The former conservative radio show host is brash and straight-talking, saying that ‘stupid people are ruining America.’ He mimics liberals with a high-pitched whiny voice.

“‘Well, he doesn’t have foreign policy experience,’ he says to laughs. ‘And the guy we have in there now does?'”

“Cain left an impression, and many of his former colleagues [at the Federal Reserve] now support him for the presidency.

“‘I would say he’s probably well-qualified, even overqualified for this job because he’s an outsider who really brings no baggage to the White House,’ McQuillian said.

“‘I have some questions about his ‘9, 9 and 9’ plan, but his leadership I think would be brilliant,’ said [former board member Samuel] Baird, who was president of Farmers State Bank & Trust Co. in Superior, Neb. ‘I think he’d be tremendous.'”

Visit msnbc.com for breaking news, world news, and news about the economy 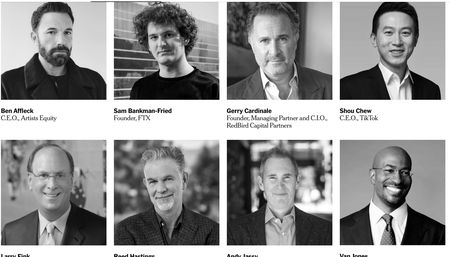