Behind closed doors on Capitol Hill last week, I asked a Republican source about the investigative efforts of Democratic staffers for the House Oversight Committee. 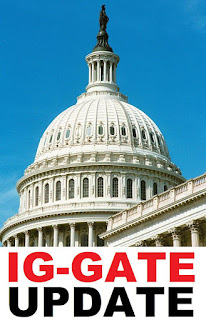 More than three weeks have passed since Oversight Committee Chairman Rep. Edolphus Towns (D-N.Y.) joined the committee’s ranking Republican, California Rep. Darrell Issa, to launch an investigation into the case of former Amtrak inspector general Fred Wiederhold Jr. The IG unexpectedly retired June 18, immediately after presenting the Amtrak board with a 94-page report, prepared by an outside legal firm at his request, documenting how officials of the taxpayer-subsidized passenger rail service had hampered his office’s investigations. Making that report public June 25, Sen. Chuck Grassley (R-Iowa) charged that railroad officials – especially the legal department, under Amtrak vice president and general counsel Eleanor “Eldie” Acheson – had “systematically violated the letter and spirit of the Inspector General Act,” through what appeared to be “unrelenting interference with the activities and operation” of the IG’s office. Four days later, on June 29, Towns and Issa announced their investigation, writing in a letter to Amtrak Chairman Thomas Carper that they had “grave concern about the circumstances surrounding the Inspector General’s departure.”

While sources with knowledge of the case say Wiederhold has insisted his retirement was “ultimately” voluntary — considerations involving ill relatives were a motive – nevertheless, the IG’s efforts to fulfill his duty of being a watchdog against “waste, fraud and abuse” had run into a brick wall of bureaucratic obstruction. Among other things, Amtrak officials were requesting prior review of subpoenaed documents, which were in some cases redacted before being provided to the office of the IG. Amtrak management had also claimed control of $5 million that this year’s “stimulus” legislation had appropriated directly to the Amtrak IG’s office, and had even tried to prevent Wiederhold and his staff from communicating with Congress without prior permission of management.

Despite the “grave concerns” expressed by Towns and Issa three weeks ago, however, Republican sources on Capitol Hill have complained that Democratic staffers on the Oversight Committee have not shown much zeal for the investigation. Sources say Democratic staffers have skipped meetings and conference calls to which they were invited by GOP investigators, who are attempting to work with Grassley’s staff in order to prevent unnecessary duplication of efforts. Sharing documents and scheduling interviews with witnesses, allowing Republican and Democratic investigators from both chambers an opportunity to question these witnesses, is a demanding logistical task. And GOP staffers complain that this task seems to be lacking in terms of bipartisanship.

The Amtrak investigation, however, is just one of several IG cases currently being investigated on Capitol Hill, and it is not the only case in which Republicans confidentially express doubts about Democratic sincerity. Consider the situation with the Senate investigation of last month’s firing of AmeriCorps inspector general Gerald Walpin. As I reported yesterday at The American Spectator:

“Staff doesn’t speak for the committee,” a source on Capitol Hill explained last week. “The committee speaks for the committee.”
That’s the practical meaning of Senate Rule 29, which has been invoked regarding the Homeland Security and Government Oversight Committee investigation into last month’s firing of AmeriCorps inspector general Gerald Walpin.
The committee’s chairman, Connecticut Sen. Joe Lieberman, is entirely within his prerogative to protect the integrity of the investigation via Rule 29, which reads, in part:
“Any Senator, officer, or employee of the Senate who shall disclose the secret or confidential business or proceedings of the Senate, including the business and proceedings of the committees, subcommittees, and offices of the Senate, shall be liable, if a Senator, to suffer expulsion from the body; and if an officer or employee, to dismissal from the service of the Senate, and to punishment for contempt.”
Staffers therefore discuss the investigation at peril of termination and prosecution, and are understandably skittish when a reporter walks in the door. . . .

Please read the whole thing. Rule 29 helps explain why “The Little Scandal That Could” doesn’t make front-page news every day. Committee staffers could be fired – and even members of the committee could be expelled from the Senate – for talking to reporters without authorization. Lieberman’s press office will only repeat assurances that the investigation is proceeding on a bipartisan basis, and the last time Lieberman commented publicly on the AmeriCorp IG case, it was to deny accusations in a June 24 Washington Times editorial that he was “punting” the investigation.

Meanwhile, however, the Lieberman committee is “reviewing” the Walpin case. There is no indication when, or even if, the committee plans to hold public hearings, with witnesses subpoenaed to testify under oath. And no member or staffer on the committee can discuss the Walpin “review” without falling afoul of Rule 29.

One cause for Republican skepticism about the committee’s investigation is the fact that ranking GOP member of the Lieberman committee is Maine Sen. Susan Collins, hardly the kind of partisan firebrand who could be expected to push hard for public hearings on the dismissal of Walpin, who is unapologetically a conservative Republican. One GOP source on the Hill said last week he expects Collins will “roll over” and do whatever Lieberman wants.

However, the AmeriCorp case took on a new dimension Friday when Walpin filed a lawsuit seeking reinstatement in the IG post. I learned of that development by phone while driving to Washington to meet with sources. To be scooped by Byron York of the Washington Examiner is no dishonor, of course. He’s an excellent reporter whose thoroughness is praised by Republicans on the Hill.

York and I, it appears, have some sources in common. One reason I keep making “shoe leather” trips to Capitol Hill is to try to shake information out of sources York hasn’t got. And this sort of journalistic competition is very much encouraged by those involved in the investigations. Working overtime to do my part, on Sunday afternoon, I discussed the Walpin lawsuit with a veteran of several federal investigations:

Win or lose, the Walpin lawsuit definitely adds a new angle to the story, primarily through the legal process known as “discovery,” whereby the defendants can be required to disclose…well, just about anything, really. If there is some document that the plaintiff can convince a judge is relevant to the case, the defendants will be ordered to hand it over, and then there are the sworn depositions. These requirements expose the defendants to legal jeopardy — for perjury, obstruction of justice and other such “process crimes” — if they don’t fully and honestly cooperate.
If all this sounds vaguely familiar, perhaps the reader is recalling a lawsuit, Jones v. Clinton, which led to the momentous deposition in which the defendant, William Jefferson Clinton, committed perjury about “that woman, Miss Lewinsky.”
Of course, as Americans were lectured for months on end, “everybody lies about sex,” but does everybody lie about firing a government watchdog whose job is to keep an eye out for “waste, fraud and abuse” in federal agencies?
Asked about the practical consequences of Walpin’s lawsuit, one former federal prosecutor familiar with such cases said that unless the suit is dropped or dismissed, it will eventually push new information about the case into the public record. “Eventually” is the key word, as the wheels of justice grind slowly. . . .

Again, please read the whole thing. This is a huge story, involving multiple investigations, and 1,200 words here don’t even begin to summarize the 1,400 words there, to say nothing of the 400 words I did last night about the SIGTARP report. York’s got all the advantages in this competition, but midnight oil is a renewable resource, and I’ve still got a little leather left on my shoes. — RSM

PREVIOUSLY IN THE GREEN ROOM:

Border encounters this Fiscal Year are higher than the population of 11 states (and Washington, DC)
John Sexton Sep 22, 2021 10:40 PM ET