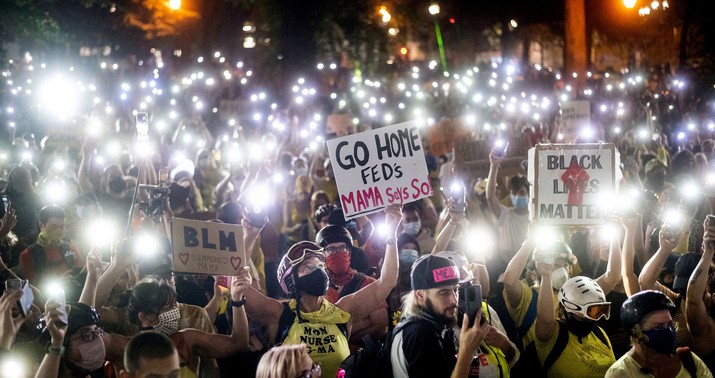 Last week Oregon’s Attorney General Ellen Rosenblum filed a request for a temporary restraining order against federal police officers in Portland. On Wednesday of this week Judge U.S. District Court Judge Michael Mosman heard arguments in the case and appeared to be on the fence, accepting some of the Resenblum’s claims but not all. Today, the Judge ruled against the restraining order:

A U.S. judge Friday denied an order sought by Oregon’s top law enforcement officer to stop federal agents from arresting people during nightly protests in Portland that have roiled the progressive city and pitted local officials against the Trump administration.

David Morrell, an attorney for the U.S. government, called the motion “extraordinary” and told the judge in a hearing this week that it was based solely on “a few threadbare declarations” from witnesses and a Twitter video. Morrell called the protests “dangerous and volatile.”

Buzzfeed has a bit more on the Judge’s decision:

In his order on Friday, the judge repeatedly described the case as “unusual,” writing that typically in cases involving allegations of constitutional violations during protests, the people affected would be the ones to file a lawsuit, not a state. Rosenblum’s office was also seeking a future-looking injunction, which set an “unusually high bar” for the attorney general’s office to clear, he wrote…

Mosman wrote that the state offered mostly “purely hypothetical” arguments about the risks facing Oregonians by federal officers failing to identify themselves during arrests, such as the possibility of counterprotesters pretending to be federal officers to kidnap protesters.

More generally, the judge wrote that the “chilling effect” on the speech rights of Oregon residents didn’t represent the kind of state-specific issue that the attorney general’s office had to show to have standing to sue.

Isn’t the whole idea of chilled rights that fewer people are willing to participate? In this case the number of protesters has, by all accounts, increased in the past week to as many as 2,000. So this argument doesn’t seem to accord with reality on the ground.

As for the arrests, according to the AP, 18 people have been arrested by federal authorities during clashes outside the courthouse this week. All of them face federal charges (meaning people aren’t being routinely rounded up and then released for no reason):

Eighteen people have been arrested this week in Portland, Oregon, on federal charges while protesting the presence of federal law enforcement agents, the state’s top U.S. prosecutor said Friday…

The charges involving the protests include assaulting federal officers, arson and damaging federal property, U.S. Attorney for Oregon Billy J. Williams said. All the defendants are local, and they were released pending trial after making a court appearance.

The FBI is now also involved investigating violence at the protests:

“The FBI’s role is to investigate violent crime and hold those accountable who are engaging in violent acts or significant destruction of property,” a spokesperson said in a statement, adding, “Our focus is not on membership in particular groups but on individuals who commit violence and criminal activity that constitutes a federal crime or poses a threat to national security.”

Today’s decision from Judge Mosman was separate from another decision related to the protests that Ed wrote about this morning. That decision issued by Judge Michael Simon on Thursday said that federal police in Portland could not arrest or use force against journalists or legal observers.

As Ed pointed out earlier, it’s often difficult to tell one group from another. Journalists often have a camera but so do some protesters. I’ve seen some protests where legal advisers were wearing shirts or vests to identify them. In any case, what’s to prevent any protester from claiming to be a citizen journalist? It’s not like you need a business card from a major news outlet to be press these days.

In any case, Judge Mosman’s decision means these officers can still arrest people who commit crimes they’ll just have to be careful about it.