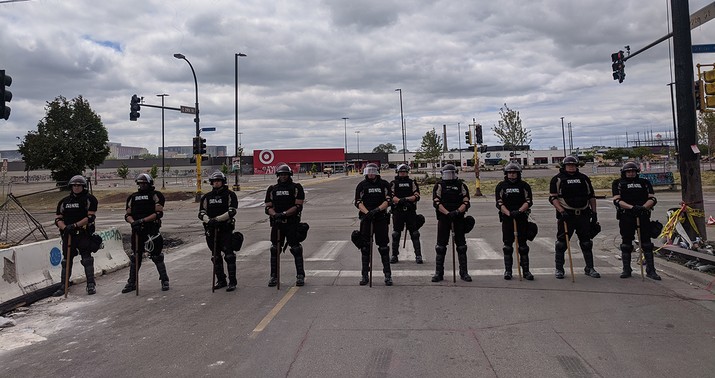 A lawyer who represents police officers has been contacted by more than 150 current officers who seek to file for disability benefits, a move taken before they leave the force. Most of the officers claim they are suffering from PTSD and that the stressful situation since the killing of George Floyd has become the last straw.

“While law enforcement is a high-stress career, the last two months in Minneapolis have pushed many officers to their breaking point,” Meuser said…

Among Meuser’s clients are officers who were inside the city’s 3rd Precinct police station, which was abandoned and subsequently burned during the May protests here. At least 13 officers were inside the building at the time, Meuser said, and some wrote what they thought were final texts to family members and loved ones fearing they would be killed. Ordered to stand down to protesters, some of the officers had fearfully counted their ammunition to make sure they would have a bullet for themselves to avoid being beaten to death, he said…

The 150 officers represent about 20 percent of the Minneapolis Police Department’s force of approximately 800. Meuser warned Friday that the number of officers seeking to file disability claims is likely to grow based on the inquiries his office has received.

The back story to all of this is that the Minneapolis City Council is working to “reimagine” the police force, a process that could take years to work out assuming the council can get its plan on the ballot and that it passes. Meanwhile, some neighborhoods have committed themselves to not calling police at all. The immediate result of all of this has been a surge in violence in the city:

More than 240 people have been shot, 13 fatally, since May 25, according to police. On Thursday evening, nine people were shot and one was killed in a span of six hours. One of the wounded was a pregnant woman.

More than 1,500 instances of gunfire have been reported across the city, nearly double the number during the same period a year ago, according to police data citing 911 calls and ShotSpotter technology. Police scanner traffic has been jammed with reports of other violent incidents, including robberies and carjackings.

So at the very moment the city has become the wild, wild west, the city council is trying to get rid of the police. Can you blame officers for wanting to get out? The Associated Press points out, the decision to file PTSD claims comes with substantial monetary benefits:

Meuser said in recent weeks, 150 officers have retained his office for help in filing for duty disability benefits through the state’s Public Employment Retirement Association, or PERA…

Doug Anderson, executive director for PERA, said 150 officers seeking duty disability from one department would be high. PERA approved 105 disability applications from both police and firefighters statewide in all of 2019, including 60 claims for duty-related PTSD and 20 for other work-related injuries.

PERA is primarily a retirement plan, in which members and employers contribute funds. Members who become disabled can receive a disability benefit until age 55, at which time retirement benefits kick in.

In order to be granted this disability benefit, two doctors have to agree with the diagnosis and submit documents confirming it so I guess we’ll see how many of these claims are upheld.

Whatever happens with these claims, the fact that 20 percent of the force is looking for an exit is a pretty clear sign of where morale is in the department. And the result is going to be more crime and fewer officers to deal with it. How long before the progressives running these places realize they’ve made a terrible mistake?