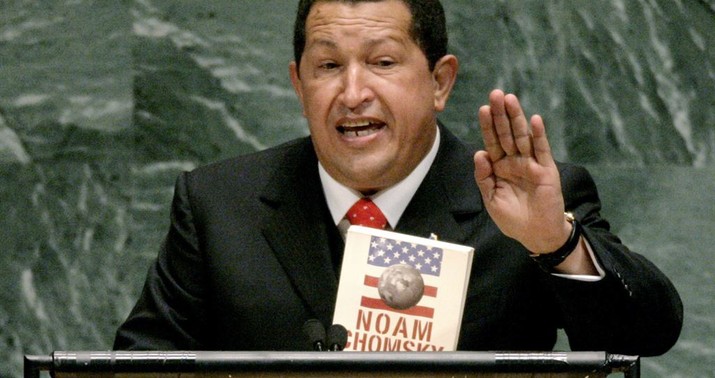 The Atlantic published a piece today by Anne Applebaum about the dire situation in Venezuela. The piece is noteworthy for its eloquence in describing the current situation in both human and historical terms. Applebaum says Venezuela isn’t just a symbol in an ideological war but a real place. That’s admirable but her own writing makes a convincing case that Venezuela’s significance as a symbol has a lot to do with socialist daydreaming:

Venezuela—especially when it was run by Maduro’s predecessor, the late Hugo Chávez—has long been a symbolic cause for the Marxist left as well. More than a decade ago, Hans Modrow, one of the last East German Communist Party leaders and now an elder statesman of the far-left Die Linke party, told me that Chávez’s “Bolivarian socialism” represented his greatest hope: that Marxist ideas—which had driven East Germany into bankruptcy—might succeed, finally, in Latin America. Jeremy Corbyn, the far-left leader of the British Labour Party, was photographed with Chávez and has described his regime in Venezuela as an “inspiration to all of us fighting back against austerity and neoliberal economics.” Chávez’s rhetoric also helped inspire the Spanish Marxist Pablo Iglesias to create Podemos, Spain’s far-left party. Iglesias has long been suspected of taking Venezuelan money, though he denies it. Even now, the idea of Venezuela inspires defensiveness and anger wherever dedicated Marxists still gather, whether they are Code Pink activists vowing to “protect” the Venezuelan embassy in Washington from the Venezuelan opposition or French Marxists who refuse to call Maduro a dictator…

Upon Chávez’s death in 2013, Corbyn thanked him on Twitter for “showing that the poor matter and wealth can be shared.” But neither Chávez nor Maduro has ever shown anything of the sort. Whatever progress the country made against poverty in the past was due to high oil prices, which have since slumped. Now Maduro presides over a disaster that is devastating the poor above all. Raffalli told me that the food-production system began to break down nearly a decade ago, thanks to the expropriation of land and the destruction of small agricultural companies, though a few big ones survive. Widespread malnutrition began a few years later. The Catholic charity Caritas believes that 78 percent of Venezuelans eat less than they used to, and 41 percent go whole days without eating…

Applebaum argues the destruction of Venezuela had another, separate source besides Marxism. It was also beset by attempts to degrade its political culture and plunder its resources. But here again, the chief culprit she cites is Chavez:

Democracy became weaker in the 1990s, thanks to widespread corruption linked to the oil industry. Chávez broke the rule of law completely. His first attempt to take power was via a coup d’état, in 1992. He won a legitimate election in 1998, but once in power he slowly changed the rules, eventually making it almost impossible for anyone to beat him. In 2004, he packed the Supreme Court; in 2009, he altered the electoral system. Just like other illiberal governments, the Venezuelan regime also sought to undermine abstract ideas of justice—which might have protected ordinary people from the authoritarian state—by dismissing them as a Western plot. Rafael Uzcátegui, an activist who runs PROVEA (the Venezuelan Education-Action Program on Human Rights), told me that the country’s rulers had tried to redefine the problem: “They said everything that we understood as human rights was a ‘liberal hegemonic imposition.’”…

Having gained full control of his nation’s legal and judicial institutions, Chávez did not use it to benefit poor Venezuelans, contrary to the mythology spread by far-left admirers. Instead, Chávez began to transfer the wealth of the country to his cronies.

There’s a lot more to the piece, all of which is worth reading but something about it bothers me. It’s very clear from Applebaum’s writing who is to blame for the terrible situation in Venezuela which makes her attempts to create some kind of odd equivalence to the Trump administration (she compares Chavez’ weekly TV show to Trump’s tweets) seem like a real stretch. Here’s a bit of her conclusion:

I am tempted to end here with a warning, because Venezuela does represent the conclusion to a lot of processes we see in the world today. Venezuela is the endgame of ideological Marxism; the culmination of the assault on democracy, courts, and the press now unfolding in so many countries; and the outer limit of the politics of polarization.

I guess every piece published in the Trump era has to ground itself to the idea that he is a world-historical villain. But the bulk of what she describes in Venezuela is the result of a socialist strongman who died a dictator and his successor who has made clear he will hang on to power by any means necessary. If you must compare that horrible situation to what is happening in America, maybe point out that Bernie Sanders also indicated some support for socialist Venezuela and also refused to call Maduro a dictator. You could also point out that Sanders has defended the kind of bread lines that have become the norm in Venezuela in the past five years.

You could point out that it is people on the far left in this country who are recommending Democrats pack the courts and create new states to consolidate power. You could point to the racial and gender polarization being pushed by the identity politics left, like the Black Lives Matter movement. You could point to the adoption of political violence as a tactic by Antifa and similar groups on the left (reminiscent of the colectivos).

You could even go back to the Occupy movement which injected a lot of socialist ideology and anti-capitalist slogans into the body politic. Because I was covering it extensively at the time, I remember that European newspapers routinely referred to the Occupy protesters as “anti-capitalists.” It wasn’t a secret what they believed. But the same protesters chanting the same things were rarely described that way in the American media.

All of that to say, if you want to worry people about the dangerous mix of political polarization and Marxism and suggest that could lead to a Venezuela-like disaster for nations who follow that path, I’m all for it. But Trump is not the politician who obviously fits the bill, Bernie Sanders is. It wouldn’t hurt to mention that.