70 former Senators: Form a “bipartisan caucus” to return the Senate to its constitutional vision 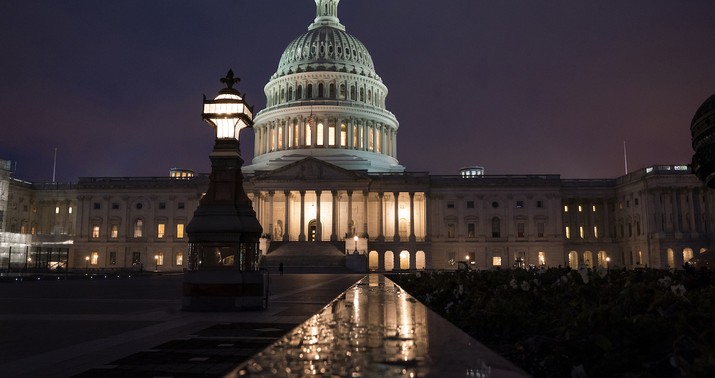 Right idea, wrong solution. Or, better yet, right idea and no solution. A bipartisan coalition of former senators have written an open letter in the Washington Post this afternoon lamenting the decline of the upper chamber in their absence. “Congress is not fulfilling its constitutional duties,” they intone, and put the blame mostly on the Senate, blaming the upper chamber in particular for partisan gridlock and its gradual buck-passing to the executive.

Their solution? Encouraging senators to form a “bipartisan caucus” for normalcy. That, they argue is the path to “making the Senate function as the Framers of the Constitution intended”:

We believe a bipartisan caucus of incumbent members that promotes a fair opportunity for senators to participate in meaningful committee work as well as on the Senate floor could help restore the Senate to its essential place in our constitutional system. Its members would need to stand firm in the face of what could be strong opposition from partisans who prefer politicians who take intransigent positions over those who champion a legislative process that celebrates compromise.

This does not have to be viewed as a judgment on today’s Senate leadership; instead, it’s a bipartisan act of shared responsibility and accountability for how we arrived at this point. We, who once held the office you now hold and who are confident that service in the U.S. Senate is as high a calling for you as it was for us, will stand up for you against any partisan opposition. We will do so publicly and repeatedly in whatever available forums. And we are convinced that many ordinary Americans will stand up for you as well, as they share our concern for the state of our government.

We know that accepting this challenge may put some of you at political risk. But we are also confident that each of you chose to serve in public life to advance the cause of a “more perfect union.” Our hope is that all of you will accept this challenge to advance that timeless and higher purpose. The Senate — and the proper functioning of our Republic — are simply too important to be allowed to continue on their present course.

Of course this is a judgment on the leadership of the Senate. This proposes to basically create a standing Gang of Fifteen, or Eight, or Twenty-One, or whatever number can block leadership on the agenda. It hearkens back to the Ganging interventions to seize control on issues like immigration and judicial confirmations, efforts that were well-intentioned but ultimately futile. We got Harry Reid’s nuclear option in 2013 despite the 2005 “gang” on judicial confirmations, and Congress never passed a comprehensive immigration reform bill despite a couple of attempts at Ganging.

These former senators are correct, however, that the Senate no longer works as the Founders intended. That’s not because of modern partisanship, however — it’s because we changed the structure of the Senate from their vision, and with it the incentives they carefully created in the Constitution for it. The framers created the Senate as a representative body for the states, and directed that the members be appointed by state legislatures rather than direct election. The intent was to give the states a method of checking the populist passions of the electorate and the federal government’s desire to expand its power at the expense of the states. Partisan politics would have less influence in that system than the interests of the senators’ home states, creating an entirely different incentive system and much more opportunity to legislate effectively.

Progressive reformers destroyed that balance with the 17th Amendment and the requirement for direct election of senators. Bipartisan caucuses and Ganging can’t possibly defeat the incentives that creates, as we have already seen for ourselves — repeatedly. These former senators never even mention this, however, because they don’t want to admit that direct election for both chambers was a huge historical error. None of them want to tell voters that they are part of the problem in this issue.

It’s both craven and hypocritical to demand a return to the framers’ vision of the upper chamber while refusing to address how the 17th Amendment destroyed it. Unfortunately, that’s par for the course in Washington too, just as is the futility of bipartisan gangs, and the tiresomeness of occasional calls for reform from those getting their own ox gored at the moment.