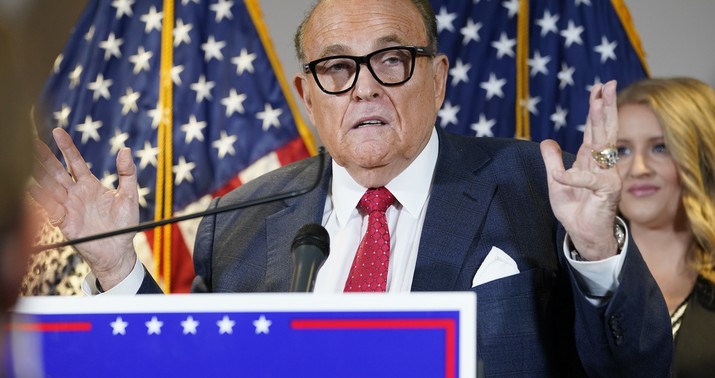 Two of the three panel members were appointed by George W. Bush. The third, Stephanos Bibas, was added to the court by Trump himself and wrote today’s scathing majority opinion. I suspect that was by design, as the court knew that Trump and his team were sure to demagogue the ruling. That’s harder to do when the author of the opinion is himself a “Trump judge.”

Reportedly the president has told aides that he feels obliged to “fight on” in court for the sake of his fans, but there’s no actual fighting happening. His “elite strike force” legal team is now 1-38 in election lawsuits. Bibas’s contempt for their arguments practically drips from the pages of his opinion. This is a fight at this point in the same way that a boxer who’s out on his feet, leaning against the ropes, taking a barrage of shots to the head is still technically “fighting.” No one’s willing to throw in the towel, though, so the pulverization goes on.

If you can spare 20 minutes, read the entire opinion. It’s only 21 double-spaced pages and Bibas’s style is admirably clear and jargon-free. All Team Trump wanted was the right to amend its previous complaint in order to add some claims that it had initially dropped. No can do, says Bibas. Normally a court will bend and allow that sort of amendment but the president’s case is so thin that there’s no reason to let the litigation go on. Especially since, as Bibas notes more than once, Trump and Rudy Giuliani aren’t alleging voter fraud. Rudy was asked about that explicitly during oral arguments before the district court and assured the judge that he wasn’t making that claim. That’s another example of him and Jenna Ellis making outlandish allegations about vote-rigging outside the courtroom and then far more modest claims once they’re in front of a judge and accountable.

Most of the claims in the Second Amended Complaint boil down to issues of state law. But Pennsylvania law is willing to overlook many technical defects. It favors counting votes as long as there is no fraud. Indeed, the Campaign has already litigated and lost many of these issues in state courts.

The Campaign tries to repackage these state-law claims as unconstitutional discrimination. Yet its allegations are vague and conclusory. It never alleges that anyone treated the Trump campaign or Trump votes worse than it treated the Biden campaign or Biden votes. And federal law does not require poll watchers or specify how they may observe. It also says nothing about curing technical state-law errors in ballots. Each of these defects is fatal, and the proposed Second Amended Complaint does not fix them. So the District Court properly denied leave to amend again.

Nor does the Campaign deserve an injunction to undo Pennsylvania’s certification of its votes. The Campaign’s claims have no merit. The number of ballots it specifically challenges is far smaller than the roughly 81,000-vote margin of victory. And it never claims fraud or that any votes were cast by illegal voters. Plus, tossing out millions of mail-in ballots would be drastic and unprecedented, disenfranchising a huge swath of the electorate and upsetting all down-ballot races too. That remedy would be grossly disproportionate to the procedural challenges raised. So we deny the motion for an injunction pending appeal.

There are hardly any real facts in the president’s complaint, notes Bibas, just dark suspicions about Democratic election officials colluding. Many of the claims made in the amended complaint were also already litigated in state court, like the idea that it’s against the law to exclude Republican poll-watchers from a polling place. It isn’t. There’s no constitutional right to watch ballots being counted and Pennsylvania law merely requires poll-watchers to be in the room, not within a few feet of the vote-counter. There’s also no equal protection violation from having different counties following different rules in what they allow poll-watchers to do. Local authorities are allowed to set their own standards on that. There’d be an equal protection problem if different standards were applied to poll-watchers from different campaigns, but there’s no allegation that Team Biden’s people were allowed to do things that Team Trump’s weren’t.

And as for the alleged urgency of the litigation, Bibas wants to know: Why didn’t Team Trump challenge any of these rules sooner?

Even if it could, it has delayed bringing this suit. For instance, in proposed Count Four, it challenges giving voters notice and letting them cure ballot defects as violating equal protection. The Campaign could have disputed these practices while they were happening or during the canvassing period. Instead, it waited almost a week after Election Day to file its original complaint, almost another week to amend it, and then another three days to amend it again. Its delay is inequitable, and further delay would wreak further inequity.

An actual “elite strike force” of lawyers wouldn’t wait until a week after the election to start objecting to practices that were in place while people were voting. But in a sense that delay is true to the spirit of Trump’s legal challenge. He doesn’t sincerely object to any of the practices Pennsylvania used in voting and counting votes. He objects to the fact that he lost, and is willing to grab at any legal argument available to try to undo that loss. It’s not a good-faith effort, just a desperate bid to upend the result of an election he thought he would win.

To add insult to injury:

a beautiful end to the third circuit docket sheet — the Trump campaign will have to pay Pennsylvania's costs for the appeal pic.twitter.com/7rcAzSePiw

.@RudyGiuliani and me on Third Circuit’s opinion:

The activist judicial machinery in Pennsylvania continues to cover up the allegations of massive fraud.

We are very thankful to have had the opportunity to present proof and the facts to the PA state legislature.

I’ll defer to legal eagles on this but I can’t understand how an attorney, who’s an officer of the court, could accuse federal judges without evidence of being part of a “cover up” and not be sanctioned for it. She’s making an allegation of out-and-out corruption by the Third Circuit. And of course she’s once again alleging fraud on her Twitter feed even though the complaint before the Third Circuit alleged no such thing.

She and Giuliani are going to get obliterated by the Supreme Court *if* the Court agrees to take this case, which I doubt. But you know what? I hope they do just because I’m eager to see how brutal SCOTUS’s opinion might be, especially now that Ellis has taken to impugning the integrity of the federal judiciary:

Further proof of the grift: Even conservative SCOTUS justices hate this sort of talk, particularly when it’s about conservative colleagues. It’s like flipping off the ref BEFORE the call. Nuts as legal strategy, boffo for scamming the rubes. https://t.co/lXntYPaDaF

I stand by what I said in this post. Getting to the Supreme Court, or at least getting to the point where they can petition the Supreme Court to hear their case, has always been the endgame for Giuliani and Ellis for the simple reason that it gives them a chance to shift the blame for failure in the eyes of their target audience. Never mind that they’re 1-38. Never mind that the courts they’ve been in front of thus far can’t contain their disdain for the weakness of Team Trump’s case. Trump fans have been primed to believe that Barrett, Kavanaugh, and Gorsuch will be “team players” once they’re handed a legal opportunity to give Trump a second term (never mind that even if Pennsylvania’s electoral votes were awarded to Trump that Biden would still be president). That’s always been a lie, but the fact that so many Republicans seem to believe it gives Rudy, Ellis, and Trump a convenient scapegoat once SCOTUS lets them down. The story of the “elite legal strike force” will no longer be about amateurish arguments and their pitifully weak array of evidence. It’ll be about them being stabbed in the back by the president’s Supreme Court appointees. The only question is whether the stabbing will involve a denial of cert or whether the Court will take the case and blow Trump up properly. Either will suit Ellis and Giuliani fine.

'All jokes ASIDE ...' Ted Cruz finally ends the fight Seth Rogen has been trying to pick with him for DAYS and it's brutal perfection