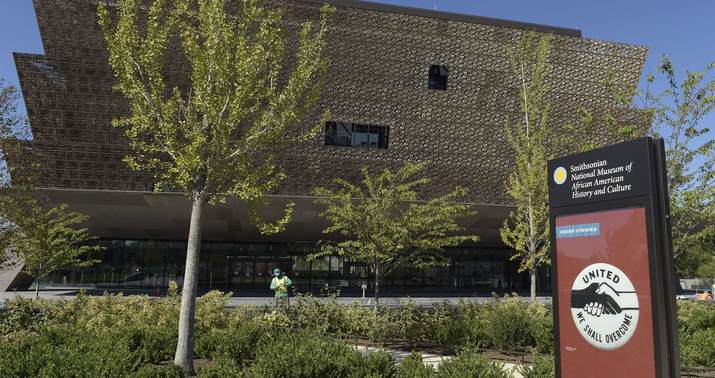 Reading this reminded me of the op-ed that appeared in the NYT last year by a progressive Latino writer who’d been convinced by his friends that wokeness required him to dump his girlfriend — because she was white.

That is, there’s a certain point on the far end of the woke spectrum at which adherents begin to sound a little, shall we say, Jim-Crow-ish in their beliefs.

Our country’s official museum of African-American culture and history has arrived at that point, you’ll be pleased to hear. The dreck captured below is so insulting in its assumptions about whites and blacks — mainly blacks — that I’m left to wonder if they didn’t pull it off of some alt-right message board online. It’s bad. Not quite “Nation of Islam inviting George Lincoln Rockwell to speak” bad, but in the same area code.

You can see the full-sized version here. I’m willing to be charitable and let them slide on some things, like claiming that the nuclear family is an artifact of “white culture.” Presumably all they mean to suggest by “othering” the two-parent household that way is that multi-generational households are at least as beneficial, which is a defensible position.

But then you come to this artifact of “white culture” and think: Did they get this from a flier handed out at the Charlottesville rally?

I speak for Caucasians everywhere when I say that if you want to cede full credit for the scientific method to Whitey, we’ll take it.

But have you looked around at this country lately? There are millions of white idiots who can’t be convinced to put on a mask in the middle of the worst pandemic in a hundred years. Our loyalty to the scientific method is complicated at best.

Here’s another one for the “You sure you’re making the point you want to make?” file:

What they mean, I take it, is that a good work ethic isn’t sufficient to get ahead in a country that’s prejudiced against African-Americans, if not nearly as prejudiced as it used to be. Systemic racism could still hold you back no matter how hard you try. Okay, but … that’s not a reason to disparage the value of hard work, which remains a necessary ingredient to success. Why would they want to disclaim that belief as something particular to the benighted white oppressor?

I don’t know what to do with the idea that “work before play” is a distinctly “white” concept. If Tucker Carlson made that point in a Fox News monologue, how would Media Matters react?

Here’s where things get really weird, though:

The idea that black people are betraying their own culture somehow when they “delay gratification” or stick to “rigid time schedules” is riiiight on the cusp of claiming that they’re primitive. It’s like Al Campanis babbling about how blacks may lack the “necessities” to manage in the big leagues.

How are they going to compete with whites if keeping schedules and resisting their basic urges in certain circumstances is naturally foreign to them?

Congrats to the museum, I guess, on resisting the urge to include bathing and chewing with your mouth closed as further evidence of the white devil’s cultural imperialism.

There are a few parts of the poster that really are insulting to whites. You’re looking at one of them in that last image with “avoiding intimacy.” There’s another elsewhere that attributes to white culture the view that “wealth = worth” and “your job is who you are.” (Ironically, to the extent that stereotype is true, it’s surely truer of the white woke professional classes than it is of more downscale whites.) But on balance it’s vastly more denigrating to blacks. And it’s not just righties like me who noticed:

The far left and the far right have lots of points of agreement. For instance, identifying hard work, the scientific method and a yearning for family structure with whiteness https://t.co/j7N2LY9zg2 pic.twitter.com/A3OPmmGcCA

“White supremacist ideologies and their followers continue to perpetuate the myth of white racial superiority,” says the museum’s webpage. Exit question: Do the museum’s curators genuinely believe it’s a myth? How can we tell?