74% of Americans at least somewhat support a national quarantine 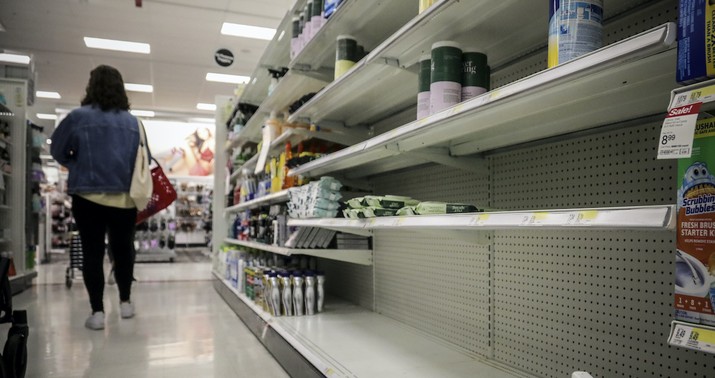 Higher than I would have expected, and surprisingly bipartisan. Eighty-one percent of Democrats somewhat support a national lockdown (in which only essential travel to places like the grocery store and the pharmacy are permitted) versus 72 percent of Republicans. It’s actually independents, at 69 percent, who are most skeptical. There are also more people who “strongly” support a national quarantine than “somewhat” support it among both Dems and GOPers.

The American people have been sold pretty quickly on the strategic benefits of social distancing despite the massive economic pain that that’s inflicting.

But to say they’re onboard with a lockdown isn’t to answer the question of how long they’ll be onboard. It can’t go on forever. The “get back to work” advocates are right that we need to get back to work. Soon. Morning Consult asked about that too, to see what sort of time horizon people are imagining for the end of “social distancing” and a return to public spaces (which isn’t the same thing as a national quarantine). Results:

Also surprisingly bipartisan. Roughly the same number of Democrats and Republicans (~45 percent) envision social distancing lasting two to three months, which is the estimate most often heard from the likes of Anthony Fauci and Scott Gottlieb. (Bill Gates, who’s made himself into something of an expert on pandemics, thinks six to 10 weeks of “total isolation” is the best-case scenario.) Only a third of Republicans imagine it ending within the next month; more than a quarter see it lasting three months or more. People are commendably realistic about what it’s going to take to flatten the curve. And Trump deserves some credit for that, having said last week that it might take until July or August for the first wave of the virus to “wash through” the country.

The wrinkle, though, is that this poll was taken on Friday, Saturday, and Sunday, shortly before he began pushing the idea of putting people back to work next week or, later, by Easter. That’ll have an effect on Republicans. Take this poll again a week from now and I suspect we’d find that the group that thinks a quarantine should last no more than a month will have grown considerably. The president can shorten people’s time horizons on this.

But there are countervailing factors that can lengthen it too. The worse the scenes are from New York and New Orleans and Florida and other hot spots, the more skittish people will be about venturing out even if they’re given the green light. “So long as the virus continues to spread, will you go back to airports?” asks David French. “Will you eat at restaurants? Will you ask your employer to keep working from home if work from home is at all possible?” The more people refuse to return to business as usual because it’s not yet safe to do so, the more sluggish economic recovery will be.

Expert opinion will weigh heavily on the public too. For instance, here’s former Trump pandemic advisor Tom Bossert gently advising readers that it would be nutty to lift social distancing measures soon:

5/ What @POTUS got right with the first 15 days–clear, actionable guidance for America–he can achieve again with similar guidance for the period ahead, even if its application looks different in places. Some cities will stay the path, others will have to take a different path.

7/ Then, they flinched. And rightly so. Now they are attempting to achieve Curve 2, the approach that does not–if timely and properly implemented–overwhelm the healthcare system.

9/ In other words, let’s not pay this high cost and then fail to achieve the health benefits.

I keep coming back to that last point myself. Why did we start shutting cities down in the first place if we’re going to relax the quarantine measures after a few weeks, possibly even before the incubation period for pre-lockdown infections is over? We’d have forced several million people to lose their jobs and cost ourselves a multi-trillion-dollar relief fund for essentially nothing.

Various health officials interviewed for this piece were savage about the possibility of returning to work before the curve has been flattened (“President Trump will have blood on his hands”) but it’s worth noting that some economists who don’t work in the White House think it’s a terrible idea too.

Prematurely abandoning or relaxing social distancing will be disastrous on both economic and health grounds. If restrictions are lifted prematurely, the result will be a follow-on pandemic surge. More people will die. What will the policy choice be then? If it is a return to restriction, starting from a much less favorable point and much more disease spread, then the cumulative economic loss will be greatly magnified. The costs we have already borne will have been totally in vain…

Ending restrictions too soon and allowing a further disease spike carry a range of collateral risks and costs. When it is safe to take up old habits, will the public trust the advice of authorities who misled them? What extra uncertainty cost will be baked into all financial markets when it becomes clear that the federal government has offered false assurances on safety? Will other countries be willing to buy our goods when the United States has turned itself unnecessarily and against the advice of experts into an exporter of products?

Another called the health-or-economy dichotomy a false choice, saying, “If we go back to work and the disease continues to spread not only will people die and the 20% of our economy dedicated to health care be overwhelmed, but people won’t have the confidence to resume normal activity… They won’t go on airplanes or travel or hold conferences or events because they won’t be able to trust the public health response has been adequate to protect them.” Right now we’re in a temporary freeze, with people watching and waiting to see if we can bring the spread under control before resuming daily life. If we abandon that and the disease spirals, some will decide to make their freeze semi-permanent. What happens to the economy when some meaningful chunk of the population decides to hunker down at home, working remotely if possible, for as long as they feasibly can?

How The Coronavirus Is Changing NYC’s 2A Community

Texas Supreme Court: Lack of immunity to COVID-19 not a disability

Not a reason for mail-in voting

“… “to help protect Minnesotans’ safety and maintain peace in the wake of George Floyd’s death.”