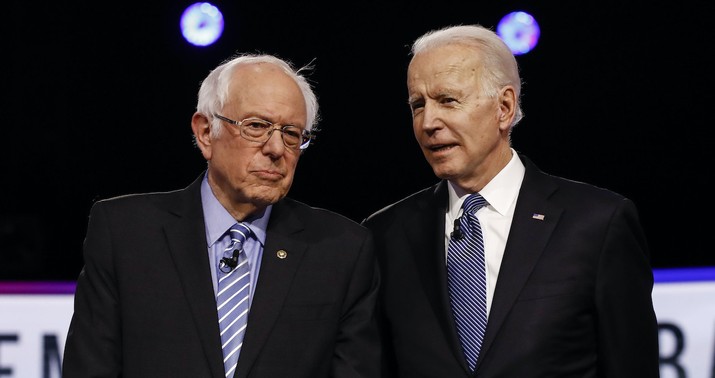 As I write this on Saturday morning the odds are excellent that Joe Biden will be taking a victory lap on the Sunday shows, celebrating a big victory in South Carolina that’ll supposedly — supposedly — propel him to a series of wins in the south on Tuesday and make this a two-man race.

But there’s a small chance that SC didn’t come through for him, that Bernie pulled the upset, in which case the race is over and Sunday morning is the final day of Joe Biden’s lo-o-o-o-o-ng political career. He’s set for “This Week,” “Meet the Press,” “State of the Union,” and “Fox News Sunday.” If he won South Carolina, he’ll use these appearances to make the case to Super Tuesday voters that Sanders is unelectable and that they should turn out in 72 hours to stop him. If he lost South Carolina, he’ll reflect on where his campaign went so terribly, disastrously wrong, even in his “firewall” state. And, I guess, he’ll start talking up Bernie, now the presumptive nominee, in anticipation of the Democrats’ battle with Trump this fall.

Or he’ll just cancel all of his bookings and avoid people for awhile. If he did end up losing last night, it would mean Joe Biden never won a single primary in three separate runs for the presidency over more than 30 years. Hoo boy.

Sanders will be on this morning too, chatting with “This Week” and “Face the Nation” to spin the outcome in South Carolina and start hyping his expected victories on Super Tuesday, most notably California and (maybe) Texas. Elsewhere, the two faces of Trump’s coronavirus response team will talk with various Sunday shows to try to ease the public’s nerves and pre-game what sort of measures might be taken to contain a mass outbreak. It’ll be Mike Pence on “Meet the Press” and “State of the Union” and HHS Secretary Alex Azar on “This Week” and “Face the Nation.” Expect them to be asked why the CDC can’t get its act together on a reliable COVID-19 test after weeks of trying, leading some state labs to put together their own tests on the fly. The full line-up is at the AP.

“It is most accurate at this time to describe what is happening there as “protests”–not riots.”

Grenell vs Swalwell: The Twitter slapfight you didn’t know you needed

“I’m talking about how you lied to the American people over and over again.”

Northam’s Mask Mandate In Effect: What Does It Mean For Concealed Carry?

Hennepin County Attorney: There Might Not Be a Criminal Charge Here

'Weaponized race like she'd been trained by Aryan nation': Van Jones gets WAY too honest about the real threat to black Americans (watch)

Walz “deeply apologizes” to CNN. How about to Minnesotans?

“We have not heard from city leadership nor have we heard from Governor Walz about tamping down this violence.”

Oh, my. How times have changed

She’s above her own stay at home order, you know.

County DA: There’s other evidence that does not support a criminal charge against the cop in the George Floyd case

“I’d have to go through a legal process.”

One party sparked a cluster of infections.

“All the authorities seem frozen.”